Brent Sutter to coach the Devils?

Share All sharing options for: Brent Sutter to coach the Devils? 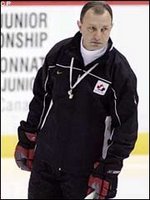 TSN is reporting that it's sources are saying that Brent Sutter is going to step down as the head coach and general manager of the WHL's Red Deer Rebels to possibly become the next head coach of the New Jersey Devils.
Sutter coached the Rebels to a 35-28-4 record last season, but lost in 7 games to the Medice Hat Tigers in the Eastern Conference Quarter-Finals in the playoffs.
Sutter bought the team in 1999 and has also coached them to 3 Eastern Conference Championships and 1 Memorial Cup in 2001.
In 2005 and 2006, Sutter was the head coach of the Canadian National Junior team and won gold medals both years. The Junior team is unbeaten under Sutter.

-a tough dude. I can remember him playing on several occasions with a bloody face. After all, he is a Sutter.

That should translate into his coaching ability. At the same time, who the hell would want to coach under Lou Lamoriello? He might get turfed a few games before the playoffs start.

Rumor is that Brent's brother Brian will take over the helm in Red Deer.

Brent Sutter gets jersey'd and beaten by Garth Butcher.