Bertuzzi to the Ducks? Get the F**K outta here!

Share All sharing options for: Bertuzzi to the Ducks? Get the F**K outta here!

Brian Burke must like the guy because he has signed Big Bert to a 2-year $8 million deal. Bertuzzi's back will be in question.
I forget where adding this big floating oaf to the Ducks' Cup roster was really necessary. Oh right, because Teemu Selanne may retire.

**UPDATE**
The Flames have re-signed Robyn Regehr to a 5-year $20 million deal.

The Predators have signed Radek Bonk and Greg Devries.

The Flames have signed vet Owen Nolan to a 1-year deal worth $2 million plus bonuses. One thing is for sure...it's better to have Nolan than Tony Amonte!

Goodbye Bryan Smolinski. The Canadiens have signed the center to a 1-year deal worth $2 million. Hey, a raise!

King's GM Dean Lombardi received flack for not doing much on Day 1 of free afency, but today he dove into the fray, signing Ladislav Nagy, Michal Handzus and Kyle Calder.

The Thrashers have signed Ken Klee to a multi-year deal. A great stable force on the blueline.

A pic below of the announcement of Gomez and Drury to the Rangers: 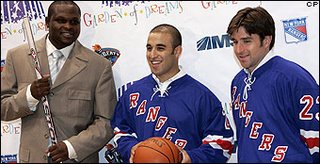