Back from the Woods

Share All sharing options for: Back from the Woods 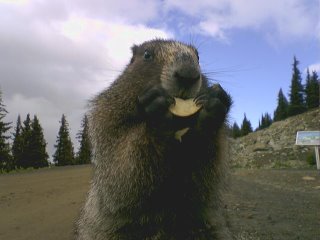 We just got back from a 4 day campout up in Manning Park. As you can see from the picture, the wildlife there has been in a lot of contact with humans. The pic is of a marmot that lived on top of one of the mountains. We drove by his den and he ran out to great us at the car, looking for food. My wife and I fed him about a half container of sour cream n' onion Pringles and took about 20 pics of the ordeal. Hopefully the poor bugger didn't get sick. He actually bit my thumb knuckle at one point.
The deer in the park were overly tame as well. The doe's would hang out with their fawns and show hardly any fear at all. Closest I've ever been to a deer (within 4 feet).
Sheeit. I haven't showered since last Friday night and I still smell Zestfully clean!
So what the heck is going on in the hockey world? I had no cell range at the park and refused to listen to the radio or buy a newspaper.

I see the Devils are busy trying to assemble a team. They signed JL Grand-Pierre, Ian Moran to increase their defensive depth and also signed Noah Clarke. I wonder how competitive these Devils will be next season. A lot of that will depend on how well Zach Parise replaces Scott Gomez.

I wonder how much more Locomotiv of the Russian Super League will be paying Alexei Yashin than anyone in the NHL would. They sought after Yashin pretty hard apparently.
Oh well, adiose Yashin. Let the door hit your ass on the way out of North America.

The Bruins finally relieved their log jam in goal by trading Hannu Toivenen to the Blues in exchange for 22-year-old Swedish center Carl Soderberg. Soderberg has no NHL experience and was drafted by the Blues 49th overall in 2004. Is it just me or do his stats look completely inconsistent?

I really like the Emery signing at 3 years, $9.5 million. That is affordable and fair. But that does make Carolina's signing of Cam Ward at $2.66 million per season after winning the Cup look like a complete bargain doesn't it?

Well, this country boy is heading to the big city in the next few days. If I see Jan Bulis I'll kick him in the nuts for you guys!