Who the heck is Simon Gamache?

Share All sharing options for: Who the heck is Simon Gamache? 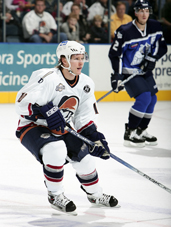 The Leafs have signed Simon Gamache to a 2 year deal on Monday. Gamache, a native of Thetford Mines, Quebec, had a spectacular 2000-2001 season with Val-d'Or of the QMJHL, winning the Jean Beliveau Trophy as leading regular season scorer, the Michel Briere Trophy as Most Valuable Player and the Guy Lafleur Trophy as Playoff MVP. Gamache had 74 goals, 110 assists for 184 points in the regular season and added a QMJHL record 57 playoff points, beating the previous record held by Mario Lemieux.
And since then he was touted as someone with major potential. Except he had a couple of problems.
At 5'9" 185 pounds he has always been knocked for being too small. He was drafted 290th overall in 2000 by the Thrashers because of his size, despite his masssive scoring ability in the QMJHL.
To make matters worse, there were knocks on his skating ability: that he wasn't fast enough or strong enough on his feet.
These are major reasons why his stints in the NHL so far with Atlanta, Nashville and St. Louis have been so short. The 26 year-old has only played in 37 NHL games, scoring 4 goals and 9 points.
How much time is he going to get playing with the Leafs? Bank on only a little, even though he did lead the Swiss League in scoring last year with 66 points in 44 games.
He'll probably spend most or all of his time with the Marlies.
If he does get a shot with the Leafs, he can get his jersey cheap here.

he was just too slow and small and weak.