Who the heck is new Blue Jackets GM Scott Howson???

Share All sharing options for: Who the heck is new Blue Jackets GM Scott Howson??? 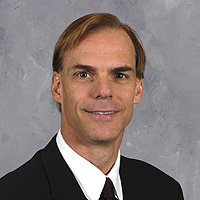 -A former Oilers Assistant General Manager. His duties included overseeing personnel decisions and contract negotiations, including salary cap issues. Spent 7 years at this post.
-The six previous seasons, he was General Manager of the Oiler's AHL affiliate teams: Hamilton BullDogs and Cape Breton Oilers.
-In his playing days, Howson was a center who played for:
*the Kingston Canadiens of the Ontario Hockey League from 1978-1981.
*the Toledo Goaldiggers (IHL) for one season (1981-82). (Rookie of the Year, 2nd in IHL League scoring.)
*the Indianapolis Checkers (CHL) from 1981-1984.
*the Springfield Indians of the AHL (84-86).
*the New York Islanders from 1984-86. He played 18 NHL games and scored 5 goals and 8 points.

-in 1990, Howson graduated from the Osgoode Hall Law School at York University in Toronto.