What you may hear in Calgary next season

Share All sharing options for: What you may hear in Calgary next season 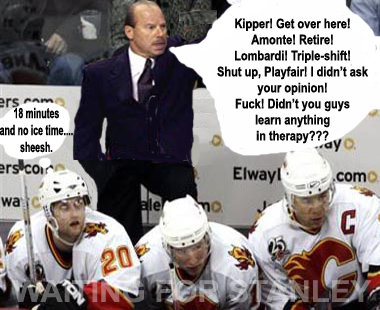 After coaching NHL teams into the playoffs from 1985 all the way to 1996, Keenan has suffered playoff futility ever since after coaching the Canucks, Bruins and Panthers.
I don't think that will be the case with the Flames.
Wow, the majority of people are expecting a mass circus in Calgary this year, and perhaps even an early firing of Keenan as well.
But let's give the strange, intense guy some credit. He is 6th all time in coaching wins. He is 5th all time in playoff wins. He has coached a team to the Finals 4 times. He has a Cup ring.
He also has a temper, and a serious psychological outlook into the game. He analyses players. He pushes them. He accepts no excuses. He is not afraid to bench guys and make spontaneous decisions to turn the teams' fortunes around.
That means that Jamie McLennan is going to play more between the pipes. That means that players who are not motivated are going to sit on the bench, Iginla included.
Is that so bad? Accountability is a good thing, and should be just what the doctor ordered for the Flames.