Share All sharing options for: Toronto is Laughland (Beer-infested rant) 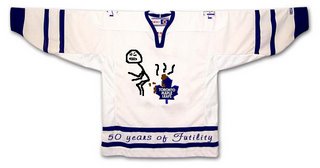 Ah yes. The ideas never stop coming in Toronto or from any pathetic Leafs fan.
While James, a WFS reader mentioned the idea of the Leafs moving Bryan McCabe to Long Island to make room for Ryan Smyth, I can entertain the thought of the Buds ridding themselves of McCabe. Oh, that would be a blessing. But that is beside the point. The point is, that every fucking year in Leafland the fans demand that John Ferguson Jr signs a major player after July 1st, because the Leafs always need SOMETHING better.
Now the talks are that Sundin needs a speedy winger on his line. Enter the wishlist for Paul Kariya. Yeah, wouldn't he be a perfect fit. Wouldn't a lot of players?
The IQ of this team and it's fans continues to baffle me and push me further away from even cheering for a team that I have backed since I was 7 years old.
It's always about buying their way to a Cup. And it never changes. That type of mentality landed them with Pavel Kubina ($5 million), Hal Gill ($2.1 million), and Mark Bell ($2.6 million). There is almost $10 million right there. And it's a damned shame. They are also famous for cleaning out their supply of draft picks, especially at the trade deadline. It's a reverse pcychology from the days that Harold Ballard wouldn't ever spend a dime on the team, and let them rot.
Sundin needs a speedy winger? I forget where Darcy Tucker and Kyle Wellwood were good enough linemates for the Captain.
This guy even thinks that the Leafs will/should rid themselves of Raycroft, McCabe and/or Kubina to make way for guys like Jason Blake, Bertuzzi, Cujo, and Peca. Yeesh.
Peca is done in Toronto.
Kubina and McCabe are going nowhere.
Raycroft will back up Toskala, or they will share duties. A great 1-2 tandem.
The Leafs don't need an overhaul. They just need a change in mentality. They need to play cohesively and learn some team defence.
The overhaul of the team comes when there are several idiots on the team that refuse to perform (See Vancouver in the summer of 2006). Bringing in a bunch of new guys is only rolling the dice on team chemistry and/or ruining it. And it sure as hell doesn't work very often. That is a big reason why the Leafs are a joke, and why they are not going to get within a sniffing distance of the Cup anytime soon.
If the Leafs would just be a little more patient, build a good core of youth and give them a fair chance, and maybe risk missing the playoffs for a bit until that happens, then so be it. Look at how long Kyle Wellwood was held back until last season. How about the Laffs trading Alyn McCauley, Brad Boyes, and a 1st rounder to get Owen Nolan. How about the picks they pissed away to get Toskala and Bell? The blunders go on and on.
But oh no. You can't miss the playoffs in Toronto. You always have to WIN NOW! And you have to acquire the big-named, over-priced idiots to get the job done. The fans demand it. And really, I am sick and fucking tired of it. It's a cycle that never ends.
Ah crap, the beer is wearing off. I'm going to bed.