Share All sharing options for: Sundin signs for 1 year / Updates 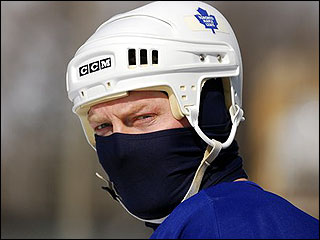 And at a discount price to boot! Last season, Sundin, 36, made $6.3 million. This coming year he will take in $5.5 million. The Leafs were pushing for a longer-term deal but Sundin only wanted 1 year. The deal also includes a no-trade and no-movement clause.
This puts Sundin in the driver's seat with his short-term future, as he can retire after the coming season or get signed by a different team next summer. (Like, a team that has a better chance at winning the Cup maybe?)
But this gives John Ferguson Jr. $800,000 more bucks to play with. Is Mats a sweetheart or what?
Hey, I am excited to see Sundin stay in Toronto. I have been a massive Sundin fan since he first entered the NHL with the Nordiques.

The Red Wings have signed Chris Chelios to a 1-year deal worth $850,000 plus incentives. He doesn't get the extra $1 million if he needs a cane and wears diapers by February.
The Bruins have signed Andy Alberts to a multi-year contract extension today.

Pierre Turgeon may announce his retirement soon. The oft-injured center is 27th on the all-time scoring list. He is still on the Avalanche's roster for one more season making $1.5 million. I'm sure the Avs would like to use that money elsewhere. 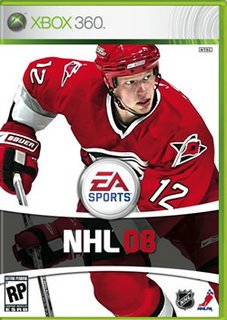 Eric Staal will grace the cover of the NHL 08 game this fall. I guess dropping 30 points from your previous season and missing the playoffs warrants a spot on the esteemed cover....
Well Staal is a big gamer himself:

"I am a huge fan of the NHL franchise and played NHL 07 fanatically," said Staal. "I am honored to be named to the EA SPORTS™ family and the NHL 08 team."

Is there really any suprise that Sabres GM Darcy Regier and coach Lindy Ruff have signed contract extensions? Nope. Ruff is going to have to find ways to motivate this team in the playoffs though.