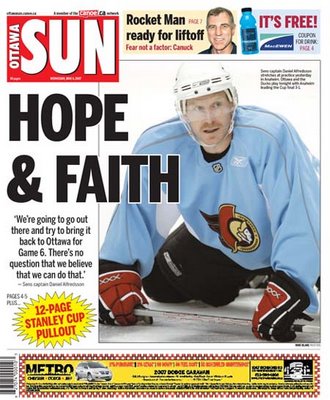 The Sens appear to be confident heading into Game 5 in Anaheim tonight. (Ottawa Sun) But they probably just sound more confident. They have nothing to lose. It's now or never. A win in Anaheim could change their fortunes in this series. They could go back home down a game, win in Ottawa, and force this bad boy to a Game 7.
But don't count on it. Gone is the Sens team that man-handled the Penguins, Devils and Sabres. Gone is that killer instinct and domination. Gone is the reliability of Ray Emery. He has been good, but has allowed too many softies. There are not enough things going right for the Sens right now. They look completely inconsistent out there and are breaking down.
There are a lot of great things happening for the Ducks. When they play Carlyle's system to a T, they are nearly unstoppable. The Ducks once again forced a lot of turnovers from Ottawa in Game 4 and sped up the ice with odd man rushes. That kind of thing is going to bury the Senators, and really has buried them in this series.
It is going to take a colossal team effort from Ottawa to change it, and to now win 3 games in a row against a superior team.
But I am tired of saying that.

That's right, I'm writing the Sens off. I quit. The Ducks win this game 4-1. What a sight that will be. I still hope I'm wrong though. I'm not ready for hockey to be over yet.

What really gets me is that this Finals is about opposites. I didn't think the Ducks were playing all that well against Detroit and were somewhat lucky to get into the Finals in the first place. I thought the Sens were pretty dominant all the way through the first 3 rounds. As soon as these 2 teams face eachother the exact opposite happens: the Sens go for a dump and the Ducks start playing consistently.


Holy hell, what a major statement by the Islanders today buying out Yashin's contract. Enough was enough. What a great move to move on from the worst contract signing in NHL history. The Isles will be paying out two-thirds of that lump of underachieving poop's remaining 4 years ($17.6 million). That would be about $2.2 million per season. Gotta love the buy-out option, huh?