1.5 hours until game time! I am reading that Game 3 of this series matched record low TV viewers for a Finals game. You know what I think? All of the people that have not been watching these Finals lose the right to bitch about having to wait for the 2007/08 season to start later this summer. I just don't fully understand how so many people tune out at this time of year. They are not true hockey fans that's for sure!
So how does the NHL find a way to increase the amount of viewers in the Finals?
I say:
-make the game more exciting again. This barrage of trips to the penalty boxes doesn't cut it. I don't feel like watching endless power plays anymore. Obstruction calls should be justified ONLY if the hook or grab visibly impedes a skater's progress.
-bring back old-style hockey again! I want to see violence and fights in the Finals. I want to see passion. The last time I checked, even kids were cheering during fights in hockey games. Fighting is a great concept for the sport, and the huge majority of the population likes watching some form of violence.
-speed up global warming. The sooner that it's 40 degrees celsius at this time of year, the more people won't want to go out into the heat. They'll sit inside with an air conditioner on and watch TV. And a good-sized percentage of those people will watch hockey. So, everyone go outside right now and burn a massive amount of plastic items and tires in your backyard... if a hippy comes over and tells you to put the fire out...shoot him!!
-speaking of weather, I'm going out now to do some flood watching. See you in a bit.

-Preissing takes an early, needless interference penalty and the Ducks don't capitalize. Then Volchenkov gets called for hooking, a weak call. Within 20 seconds, Andy McDonald shoots a puck at Emery and it deflects off of Phillip's skate and under Emery. 1-0 Ducks. Assists from Getzlaf and Pronger. 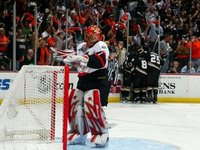 -What a bad start by Ottawa. Now they are taking ANOTHER penalty! Spezza this time. No dice for Anaheim.
-The crowd is booing Alfredsson for his shooting the puck at Niedermayer in Game 4. They are also yelling: "Alfie sucks!"
-Frenchie Beauchemin just saved a goal. Spezza shot the puck at the wide open net and Bouche flashed out his stick. That was Mitchell-esque!
-when the Sens had a chance on the PP with Pahlsson in the box, most of their chances missed the net. Giguere hasn't had to be good yet more than half way through the first period.
-so far, the Sens look scrambly, probably from playing desperate, and the Ducks look cool, composed and loose.
-The Sens blow another PP chance and for the second time in a row, the Ducks break up the ice on a 2-on-1 as soon as the penalty expires. This time Rob Niedermayer keeps the puck and charges in on Emery and puts a back-hander past the Ottawa goalie. 2-0 Ducks. Assisted by Perry. The collapse of Ottawa is almost complete.
-God dammit these refs are letting nothing go tonight. It's a first period filled with penalties. Ottawa took 3 in a row to start the period and then the Ducks took 3 in a row to finish the period. I don't know about you, but I don't like this kind of hockey. I'd rather see clutching and grabbing hockey than this horse shit. It fucks up the flow of the game.

Shots after 1: Ducks 5 Sens 3.
During 12 minutes of that period, somebody was on the PP. Yeesh.


On Coach's corner, Cherry goes off on his usual tirade about how Canadian players are the best. An interview with Bryan Murray was shown and the Sens coach, who drafted a lot of the young Duck players, mentioned that he wanted to build the Ducks with bigger Canadian players. Interesting. Can you imagine what he would have been saying right now if it was Detroit up 2 goals on Ottawa up 3 games to 1??
Of course, Cherry is angered still by when the Canadian media questions Canada's hockey system whenever the Canadians fail to succeed especially at World Tournaments or the Olympics, etc.

-The Ducks are 7-0 when scoring first in these playoffs.
-Is Dustin Penner any good? He just knocked Corvo off the puck, waltzed in front and took a shot on Emery. Nice glove save though.
-Halfway through the 2nd, and the Sens have only had 1 shots on goal. They have only had 4 shots all game!! Most of their shots have missed the net or have been blocked. The Ducks are trapping and the Sens once again must be frustrated.
-Oh I say that and NOW Alfredsson wrists a shot over Giguere's left shoulder! 2-1.
This will change the face of the game and put some pressure on the Ducks. Assists by Schaefer and Fisher.

-Now the Sens are flying. They just hit the post!
-Oh boy. Chris Phillips just pulled a Steve Smith! He got crossed up with Emery as Ray stopped the puck for him behind the net! Oh no...3-1 Ducks. That's tough. Poor Philips has been so good in these playoffs too. Assist by Ray Emery. haha
Actually Travis Moen gets credit for it.
-Daniel Alfredsson is being a hero! He just muscled his way to the net and roofed the puck on Giguere again! 3-2! Shorthanded! Wow. That was beautiful heart shown by Alfie.
-Seconds later, with the Ducks still on the PP, Beauchemin's point shot goes off Volchenkov's skate and over Emery. 4-2 Ducks. Assisted by McDonald.
This game is enough to make you schitzophrenic.

My pick for the Conn Smythe is Scott Niedermayer, even though I am hearing a lot of Giguere talk.

-Am I hearing Slayer in between faceoffs at the beginning of the 3rd? Raining Bloooood!
-With a 2 goal lead, we should see the Ducks shut down the Sens and finish this. The Ducks must be nervous though. If the Sens could get a quick one...
-Speaking of Scott Niedermayer for Conn Smythe, Scottie boy just shot the puck on net and Travis Moen deflects it in. 5-2 Ducks. Emery had given the puck away there as well. I hope the Sens' souls belong to Jesus, because their asses belong to the Ducks.
-Vermette is going to get a penalty shot here. He was hooked on his breakaway by Marchant. And he.....had the puck roll off his stick! No shot! Ouch.
-I was thinking, maybe Mickey Mouse should hand the Cup to Scott Nieds after the game instead of Gary Bettman. I kid. Maybe Emilio Estevez should do it!
-Good point by Greg Millen: the last brothers to win the Cup on the same team were Duane and Brent Sutter with the Islanders in 1983.
-6 minutes left and the Sens look like they won't put up much of a fight.
Just went to Battle of California and Earl Sleek predicted a 5-2 Ducks win tonight..Geez Earl, you saved your best for last didn't you?
-Sorry to jinx it. Sean O'Donnell scores with a beauty slapshot to make it 6-2.

-Pandemonium at the Honda Center as the clock ticks down...4...3..2...1 and it is over! The Ducks have won the Cup. Ah, there's Mrs. Niedermayer giving high 5's. Good for her.
-Brian Burke wastes no time coming to ice level. He's waited a long time for this.
-The Sens look completely dejected. the only ones who should be shamed are Spezza and Heatley..invisible again tonight. Hold your heads up Sens, you did well.
-Honestly, moments like these give me chills and make my eyes haze up. I love hockey.
-Scott Niedermayer wins the Conn Smythe and that was a no-brainer! Look at Brian Burke out there on the ice! haha! love it!
-Lord Stanley...
-the Ducks are the first West Coast team to win the Cup. Nice point, Bettman!
-Yeah Niedermayer! Yank that Cup out of Bettman's hands! Scott gives the Cup to his bro right away! Wow. Wonderful. And Robbie gives it it Teemu! Teemu gives it to Marchant! Then to O'Donnell. To May! To Jiggy. then to McDonald. He gives it to Pahlsson. Kunitz. Beauchemin. DiPenta. Moen the 2 goal man. Perry.....
This is great stuff. I love the order of who raises the cup first after the captain takes it. It's a class act.
-aha look at Scott Niedermayer and Selanne doing the big skate. Awesome.
-Yeah Bob Cole, I love team pics too.
-Nice how they didn't allow all of the families and others on the ice this time. Much better.
-You ever see Brian Burke that happy before??

-Scott and Rob raising the Cup together is a great visual. Cranbrook, BC must be proud.
-I see they put plastic up in front of the player's stalls to prevent the spraying champagne from soaking them. That's smart.
-Look at Giguere holding his child on the ice. What a great story. This is where 'hatred' of players takes a back seat and you respect players for who they are.
-Stuart Valley Saskatchewan can be proud of Travis Moen tonight, as he scored 2 goals including the winner.
-Sean O'Donnell was wired by phone with his parents during his post game interview. Great stuff. His dad predicted a 6-3 Ducks win. Close.... O'Donnell may have been the only Duck to give the Sens any props on CBC.
-Penner says Perry's favorite song is 'Glamorous' by Fergie??? It looked like Getzlaf and Perry were singing it and dancing while Penner was being interviewed by CBC.