Seen /heard around the League Monday

Share All sharing options for: Seen /heard around the League Monday

"We've got something going on right now," Hurricanes' GM Jim Rutherford said. "It's kind of a time-frame thing whether it's going to happen or not. We're working on maybe changing up the mix of our defense. That might be a possibility." (News & Observer)

Bob Hunter, a sports writer for the Columbus Dispatch, talks about how aggressive the arena workers were after the Entry Draft was over to get the writers and reporters out of the building.

Wings GM is confident he will re-sign Dom Hasek. He is fairly confident that Bertuzzi will sign for less than his $5.3 million because of nagging back injuries. However, I'm sure he is a lot less sure of Matthieu Schneider returning, as back-to-back 50-plus point seasons will drive his current $3.3 million contract skyward...and no doubt with another team. (Detroit Free Press)

If there was ever a GM on the hot seat, it's Kevin Lowe. Fans demand a blockbuster deal, and are even less thrilled about his draft choices.(Edmonton Sun)

When a team that is in the same division (and state) as you, and has been around a lot less longer than you have, and wins the Cup when you haven't in 40 years...naturally, fans are going to be pissed off. (L.A. Times) But don't worry, Kings fans. I think Dean Lombardi has your team heading in the right direction.

I love angry articles. And Dave Stubbs writes a beauty piece today about how Hab fans should get their heads out of their francophone asses (putting it crudely in my own words)). Here is an excerpt:

By not stocking his club this weekend with Quebecers, some believe that Gainey has thumbed his nose at the club's history and the fervent wishes of its faithful.
Credit for this goes to media voices who incite impressionable fans, both parties building walls around Quebec for so long that they don't realize their barriers also keep themselves inside.


Nice! I will say though. I wouldn't mind seeing more francophones on Montreal like they used to in the past, as they were much more successful ack then.
But I'd also like to see more BC boys play for the Canucks.

A ticket drive/rally has been set for July 19 in Nashville at the Sommet Center.(The Tennesseean) Nobody show up so the team can come to the country that it belongs in.

What in the red, white and blue hell is the meaning of the pic below with Alexei Cherepanov? 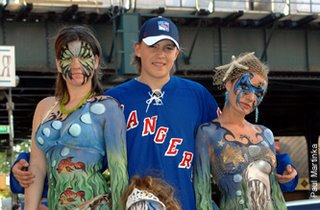