Pronger gets a one game suspension

Share All sharing options for: Pronger gets a one game suspension 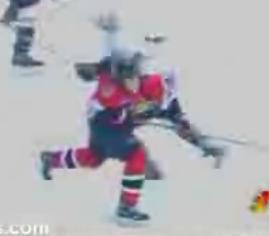 And I'm sure most people will be saying: "ONLY 1 GAME??!!" And that question may or may not be justified. Pronger struck Dean McAmmond in the head with an elbow last night as McAmmond was skating by him. An elbow that "Macho Man" Randy Savage would have been proud of. CBC cameras had a closeup of McAmmond's face, and he was clearly dazed, but not knocked out.

"This one took a lot of thought," Colin Campbell, the NHL's executive vice-president and director of hockey operations, said at a news conference. "It wasn't an easy one. It didn't jump out at us right away."

Randy Carlyle must be breathing a sigh of relief:

I'm not sure how he can possibly think that Pronger wasn't trying to hurt him.
I can understand why Colin Campbell made this decision, and believe me, some of these reasons could be bullshit, but reality nonetheless.
1. It is believed that McAmmond did not suffer a concussion. Apparently he was watching the game from behind the bench somewhere, according to CBC. He may not miss Game 4.
2. And this is the worst one: McAmmond was not taken off the ice on a stretcher. He was helped off the ice by 2 of his teammates. So the 'visual' aspect was not there for a 'sympathy vote'. If someone on the team staff instructed him to lay there and fake it and wait for the stretcher, Pronger may have gotten a longer sentence, and the media would have jumped all over it, calling it a black eye on hockey all over again.
But hats off to McAmmond anyway. He got up. He acted like a warrior.
3. I don't really want to get into this too much again, but I still stand by the fact that Pronger's headshot on Holmstrom was less intentional than the press and most fans thought it was. Rob Niedermayer's contact on Holmstrom just prior to that created the problem. This lowers the 'repeat offender' case, in my opinion, and perhaps justifies the NHL's 1-game suspension.

I think I mostly stand alone on my opinion, but I won't waver. Feel free to add your opinions here.

I wonder if Pronger wears the hard plastic elbow pads.
Another thing, it wouldn't be such a bad idea for refs to video review this kind of incident and then call a major penalty on it if they missed it initially.