Nonis and the Salary Cap increase

Share All sharing options for: Nonis and the Salary Cap increase 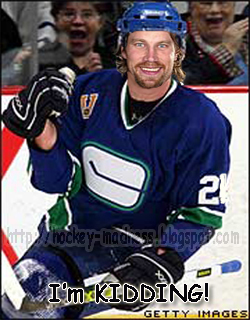 As a Canucks fan, you almost have to drooling at the options that Nonis now has with the $6 million tagged onto the Cap maximum. Hell, Nonis probably needs an underwear change already.
Perhaps, we could see Nonis pick up some higher priced UFA's in the following weeks. UFA's that aren't Jan Bulis, Marc Chouinard-types. Even though, bless his heart for signing the free agents that he did last summer.
Does this put the Canucks in the running for a Gomez or Briere? Maybe. But I hope not. I think he's better off to spread the wealth out a little bit and stay a couple of million below the $50 million cap.
Perhaps now Nonis can take a stab at a few guys like:
-Dainus Zubrus (please NO!)
-Mike Peca
-Jeff O'Neil
-Ruslan Fedotenko
-Michal Handzus
-Petr Sykora (hell no!)
-Bill Guerin
-Eric Lindros (wahahaha!)
-Alyn McAuley
-Richard Zednik

Don't bank on a blockbuster happening. But Naslund does need a decent center.
I'm not sure exactly where the Canucks are with salary commitments, but once they shed themselves of Smolinski and Bulis (perhaps) they should be in the $40-43 million range.
Hang on to your butts, Sunday is almost here!!