Share All sharing options for: NHL Awards: One-liners of the night / Observations 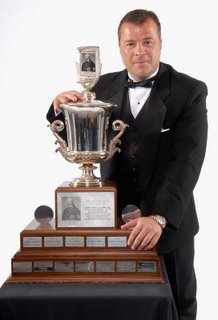 Ron MacLean: "As you know it's a little easier to get a penalty nowadays. I'm not saying the standard is spreading, but not even the Sopranos got whacked."

After MacLean shows some images of Jagr laughing at his jokes at last year's awards, Ron quips: "I don't know what I said that was so funny. Probably said 'backchecking'."

Franke Selke Jr to Gilmour: "Hey, you look nice tonight, but you always looked better in the blue and white."
Amen to that.

Ron MacLean: "The next award is the Vezina, there are 4 finalists for the first time in history. So there's a greater chance of you sitting next to a loser tonight!"

Did you see the look on Luongo's face when Brodeur was announced the winner of the Vezina? It looked like he wanted to whack him and let the crows eat his caracass.

Did you see Kelly Hrudey gawking at Trish Stratus?? Or was he eyeing George Stromboulopolous?

Gordie Howe: "It's hard to believe that anybody can give (playing hockey) up. If they they do I hit them in the back of the head with a stick."

Can these awards shows get any more boring? MacLean did well, but all of the other script writing was terrible.