Share All sharing options for: Jason Allison is still alive? 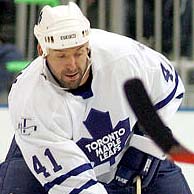 The 32-year old Allison has made it clear Friday that is is mentally and physically ready to play in the NHL.

"I'm physically and mentally as healthy as I've been in five years," Allison told The Canadian Press in an interview on Friday. "I'm excited and ready to go." "I had a lot of personal stuff to deal with last year - just getting my life re-organized and dealing with family issues," said Allison, who went through a divorce.
It's been a good year for me, even though I didn't play hockey and people were wondering where I was or what I was doing . . .

It was important for me to just get feeling good about life."


In regards to taking ALL of last season off, Allison said:

"I was planning on playing and then to be honest, I was kind of hoping to go to a few certain teams to be close to my (two) kids and that didn't work out. So I kind of just decided to take the year off and get my stuff organized and get my head in the right place."

Oh great, a REALLY slow skater with baggage. Hey, who wants to sign up?

Allison had 60 points in 66 games in his last season, with Toronto 2 seasons ago.
His sluggishness was overly apparent, but his ability to work the power play was terrific. 39 of his 60 points were on the PP.
But don't bank on anyone taking him this summer unless they really have to.