Is Nonis going to pull off a blockbuster?

Share All sharing options for: Is Nonis going to pull off a blockbuster? 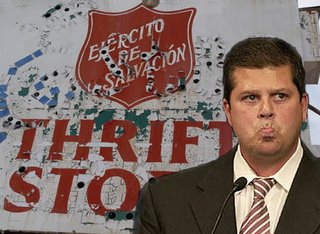 Speculation. Rumor-mongering. I love this time of year. Curiosity levels are at an all-time high. And players are rumored to be going everywhere.
Like Scott Gomez coming to Vancouver. Like Dave Nonis making room for Gomez to be signed by dumping Morrison and/or Ohlund's salaries through trades.
Hey, everyone wants to see a big deal happen in Vancouver....
But do we really need another $6 million player on the Canucks? Not at the expense of ruining the depth lower in the roster. I am not getting too hyped about Nonis signing a Briere or Gomez. Not until Naslund's contract is up and we take his $6 million contract off our hands.
To put my own speculation out there, I think an Ohlund and /or Morrison trade is possible sometime this season or even off-season as their contracts expire after next summer. I could see it being Ohlund first, as the Nucks have so much defensive depth. Alex Edler is making Ohlund expendible, IMO. But the $3.5 million saved by trading Ohlund probably won't go towards a marquee player. Rather, Nonis will do the same thing he did last summer, which was go to the Salvation Army and find some cheaper talent that will hopefully improve in Vancouver or over-achieve. Guys that will replace the soon-to-be departed Smolinski, who really didn't work out here, and perhaps Josh Green, Jan Bulis, and maybe even Trevor Linden. Yeah, he'll need a few $1.5 million types, and then stay under the cap a bit. That would be the SMART thing to do, wouldn't it?
Next summer, if Naslund retires, THEN we'll have a new ball game. Then at least the desire for a blockbuster deal will be justified. Just don't expect that this season, yet. If I'm wrong, I'll burn my Sundin jersey and post it.

By the way, you know which cheaper talents I'd like to see come here?
1. Jeff Hamilton. 18 goals and 39 points in 70 games in break-out season. He has good hands.
2. Todd White. Good play-maker. 31 assists and 44 points in 77 games last season.
3. Wes Walz. Speedy and gritty role player.
4. Mark Smith.
5. Erik Rasmussen. Big and strong. Defensively resposible.
6. Adam Mair
7. Bates Battaglia. Watched him all year. A tough gritty winger who scored 12 goals and 31 points in 80 games with limited icetime.
8. Martin Gelinas (oh yeah!)14 goals and 44 points in 82 games. Who wouldn't want Gelinas back? His grit and experience with fit in so well.
9. Anson Carter. Yeah yeah, controversial. But Carter may have to take a huge decrease in salary to continue his NHL career. After searching all or most of last season for a constant 3rd man for the Sedins, unfortunately the right guy for the job was an asshole that left for greener pastures the previous summer. I wouldn't mind seeing him return at a $1.5 million salary, just to make the #rs Dein search go away. And no, Pyatt is not necessarily the right guy for the job.

Anyone else have opinions here? How about Radek Dvorak?

(Thanks Hodge, I stole your Photoshop image!)