Share All sharing options for: Iron Mike to Ignite Flames? 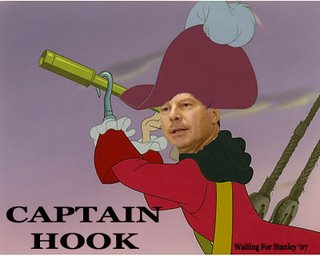 TSN is reporting that Mike Keenan is on the verge of becoming the next coach of the Calgary Flames. Even though the Flames went 43-25-10 this past season under Jim Playfair, their lack of ability to win on the road embarassingly cost them the first round against the Red Wings.
Keenan is more of a Sutter-type than Playfair I'm sure. He doesn't f**k around, and brings out the best in his players through psychological rants. He holds them accountable.
What really had concerned me is how Playfair was not let go earlier, weeks prior to the end of the season when the Flames were playing subpar. I thought Sutter would have taken over the head coach job and fire Playfair before the playoffs had started.
Keenan should bring some sense of identity to this Flames team that desperately needs it.
Keenan will also bring controversy, no doubt about it.

**UPDATE**
Jim Playfair will probably remain with the Flames as an assistant coach.