Heard around the NHL

Share All sharing options for: Heard around the NHL

Daniel Briere said from California: "I wish things would have gotten done earlier with Buffalo, but they didn’t."
Remind you of Ryan Smyth just a tad?

Regarding becoming an unrestricted free agent, Briere said:
"It’s exciting. I’ve never been through it before. If it gets there, I just want to be around where it’s going to happen and where my agent’s going to be so we can deal with it directly and not over the phone, relaying messages. I want to be there when the offers come in."
The Buffalo News
"The reason for the cap is so that they could have an immediate redistribution of talent around the league. Now they will raise the salary cap so that teams can once again overpay for talent to keep them in town." - Joe Puckster, a Wings fan commenting on this article (Detroit Free Press)about the Wings having about $16 million to spend this summer.
I don't fully agree with Joe...yet. The talent is still being evenly distributed. It's just that teams that culture a young talent to superstardom eventually pay the price of losing the player because his salary inflates and he leaves town. That is a raw deal.
The Oilers have come to terms with European exile Dick Tarnstrom. With the increase in the max of cap spending, how hard are the Oilers going to pursue Ryan Smyth? Or is that a burned bridge?
"In Marty's (Gelinas) case, it's not a money issue, it's more of a situation with his family," Jacques Martin said.
So where is Gelinas' family, Alberta?
"There's been all this speculation because I've been out there very publicly saying I want to bring a team to Kansas City, either through relocation or expansion,'' William Del Biaggio said Thursday. "(But) it's also public that Nashville is not easy to get out of there."
Del Biaggio seems to be the new front-runner to buy the Predators franchise.
From Newsday.com:

Earlier, the Islanders were said by TSN in Canada to be shopping the rights to negotiate with Smyth. The Isles denied the report on their Web site, and Snow turned down a request from Toronto to talk to Smyth.

Oh yeah, the Leafs are at it again.

The Islanders have no intention of trading Smyth's rights before the July 1 opening of the free agent market because they believe they are in the running to sign him. By the same token, they are open to offers to negotiate with free agent Jason Blake. Blake's agent, Neil Sheehy, said the Isles' leading scorer turned down 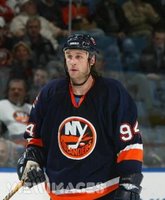 a new three-year offer from Snow that is believed to be worth $10 million.

Blake will get $4-5 million elsewhere, no doubt.
Damien Cox writes this in the Toronto Sun:

Last week's deal, which came on top of trading away 2005 first-round selection Tuukka Rask and first-round picks in both the 2003 and 2004 drafts (Raycroft deal), cemented the concept that Ferguson intends to challenge for not only a playoff spot next season, but the Stanley Cup itself in the next two seasons.
Why else would a team move its top pick after making similar moves in other years if not to compete for a championship? The risks of moving first-round picks in the salary cap era include not having enough young players making $1 million per season or less to compete at the highest level (see the Anaheim Ducks) so the Leafs' management team must believe it already has such players in the organization.

Justifications, justifications. The Leafs have thought they were contenders for several years now...and the cycle goes on and on and on...
Sure, the prospects are there...but for how long? Cox is just another eastern Canadian Leafs fan with his head stuck in his arss.
However, Ferguson's time is running out to win. So he is going to pull out all the stops.
54% of Lightning fans that voted on a poll at Tampa Bay.com think that Marc Denis should be traded. If Denis doesn't step up, Johan Holmqvist will take over as #1, if he hasn't already.