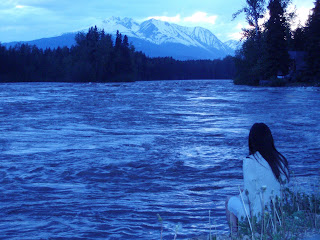 Communities and home-owners along the banks of the Fraser, Bulkey and Skeena Rivers in British Columbia are on evacuation warning. The earliest evacuations could begin on Tuesday in northern BC, as a low-pressure storm system moves over B.C from the southwest, probably dumping large amounts of rain.(pictured).
The 33 degree celsius-plus weather has already raised the rivers by several feet this weekend, as there is still a lot of snow in the many mountain ranges along Western BC. Way too much snow.
If the storm system brings a lot of rain and the temperatures rise again later in the week, we could see the biggest flooding in this area in years. The river levels are forecasted to be the highest since 1972. 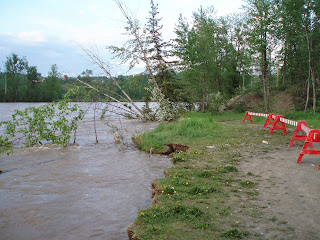 For now, even in my hometown of Smithers, residents flock to the rivers occasionally to check the levels and watch the water come up. Honestly, our dark, curious sides actually want to see nature inflict it's wrath. Hell, I love natural disasters even if it is at the expense of others' belongings, but never their lives.
It really doesn't pay to live on a flood plain with a river bank that is 4 feet high or less. And it is abundantly clear at times like this.

CTV News footage of floodings in Passmore, BC. 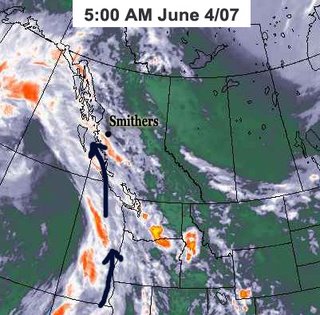