Nice Sens rap at the start of CBC's HNIC!

I just got back from sandbagging the river banks at my uncle's farm. Damn my arms are tired! The water continues to rise with the warmth and rain, and the problems are just starting here. More on that later.

The Sens' crowd is hoppin', how could the Sens not respond to that? Puts the Ducks fans to shame.
Alanis Morissette looks and sounds good, maybe a little too slow and low on the Canadian anthem though. I see Teemu undressing her with his eyes...Dirty Fin!

-No Dean McAmmond tonight. So much for Carlyle's miracle theory!
-There's nothing like early penalties taken by Beauchemin and Perry to squash any early momentum for the Ducks. Their PK, as usual, looks good, because they have had a lot of practice at it!

-Spezza and Heatley look better already. They are generating chances on the powerplays. The shots are already 7-0 Sens 6 minutes in. Giguere looks solid and will probably have to steal this one for the Ducks.
-the Sens are relentless with their attack. Once again the Ducks are on their heels for long periods of time. Actually, the Ducks haven't shown up yet in the first 10 minutes. Ottawa is too fast for Anaheim.
-Ray Emery is going to have to control his rebounds better. The Ducks' first shot on goal, he lets out a huge rebound and Perry almost scores.
-Perry gets another chance on a 2-on-1 and hits the post! Whoa that would have been deflating. The Ducks finally are waking up with about 5 minutes left: taking advantage of turnovers and finding some speed game of their own.
-1 second left an Danny Alfredsson scores a PP goal! 1-0 Sens. They deserved that. Assists from Fisher and Schaefer.

-Emery still doesn't look sharp. McDonald hits the crossbar with Ray laying on his back. No luck Ducks!
-The Ducks finally have some jump and are pressing the Sens for the first half of the 2nd. A boneheaded interference penalty by Neil didn't help! Shots are 8-1 Anaheim in the first 10 minutes.
-Right after Philips came out of the box, Marchant fishes the puck out to McDonald in front of the Sens' net. McD outwaits a sprawling Emery and roofs it. 1-1 game at 10:06.
A 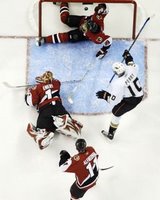 Assisted by Marchant and Perry. Perry has been great so far. That was a defensive breakdown by Ottawa.
-Moments later McDonald breaks in on the right side, dekes Volchenkov out of his jockstrap and makes it 2-1 Ducks at 11:06, exactly 1 minute between McD goals. Scotia Bank Place resembles a graveyard right now.
Assists by Rob Niedermayer and Sean O'Donnell. What the fuck was Volchenkov doing? He put himself completely out of the play there!
-The play opens up with 5 minutes left in the 2nd, the Sens get a few chances finally, but it's the Ducks who create for themselves even better opportunities. The Sens' D is pinching in a bit and the Ducks are getting odd-man rushes. No harm done yet.
-Another 2-on-1 and Emery makes the save of the game on Frenchy Beauchemin. Glovely!
-There is a god afterall. Dany Heatley takes a cross crease pass from Eaves with 2 minutes left and buries it! Spezza also assisted. Are the big guns coming alive now??? What a knife in Anaheim's heart. That was only the Sens' 4th shot on goal in the 2nd. The Ducks have had 13!
-how big were those Emery glove saves now?
-Total shots so far in this game: Senators 17 Ducks 15.
Haha, Alfie shoots the puck at Scott Niedermayerright before the buzzer sounds causing a scrum. Alfie then punches Moen in the face and 'tough guy' Moen acts like Buster Douglas just hit him! What a jackoff!
-These teams are becoming more and more evenly matched. No one goal lead is safe in this series that's for sure!


-Don Cherry made a guest appearance on NBC's second intermission report with Brett Hull and Bill Clement. Cherry goes on a tirade about how the NHL cannot eliminate fighting and finds it ludicrous that the NHL and American channels want to clean up the game and take violence out of it when they watch football "kill the quarterback" and UFC on TV. He's right, it makes no sense. Hull and Cherry then mentioned the hard plastic shoulder and elbow pads need to go to prevent head injuries, and referred to Pronger wearing them. Agreed 100%.
Cherry and Hull disagreed on whether or not Alfredsson kicked the puck into the net in Game 3. Cherry said no. Hull and Clement pointed out that Swedes are good at soccer...haha and baited Don into some form of anti-Swede comment. Great television! Don Cherry can't get excited anymore though. When he does, his voice cracks. It's been getting worse and worse over the past couple years. I think his voicebox is wearing out from bragging all the time and praising Bobby Orr's holy name!
People, before headshots are eliminated from hockey, the elbow and shoulder pad hardwear have to go! Why won't anything get done about that? Cherry is so right about this.


-The Sens had a golden opportunity on the PP but couldn't convert. Moments later, the Sens get caught up ice again, Selanne feeds the puck to Penner on a sloppy 2-on-1 play and Penner buries it. 3-2 Ducks. Damned Ducks can sure counter-attack well and make Ottawa pay for their mistakes.
-the Ducks are going into their checking mode again, but Ottawa is skating and forechecking hard. It's going to be a wild finish. There is 10 minutes left. The Sens need to find something here or....
-The Ducks are not winning the races for the puck in their own zone when Ottawa forechecks, but it doesn't matter because they are clogging up the front of the net and daring the Sens to shoot through a wall!
-Corvo got clipped moving through the neutral zone. Some Duck took the puck and moved it Perry who broke in on Emery alone. Emery makes a terrific save there! Whoa! The rebound shot went off the post! Phew! Can the Sens respond??
It's tough the way the Ducks are tightening up defensively and clogging up the neutral zone!
-Emery is pulled with 1:32 left...Alfredsson tips a point shot and Jiggy stops it.
The Ducks play keepaway...and it's over! Nice work by the Ducks to shut down the Sens. The Sens just couldn't muster anything more than a solid forecheck.
The Ducks go home with a chance, a bloody chance....

People are saying that Alfie rallied the Ducks by shooting the puck at Niedermayer at the end of the 2nd. Maybe he did.
Hey..WHO NEEDS PRONGER???? That's the 2nd Ducks win without Prongs in these playoffs.