Dave Lewis gets the axe

Share All sharing options for: Dave Lewis gets the axe 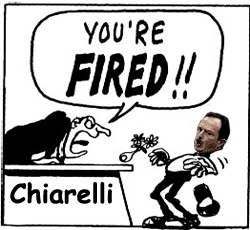 I had speculated this for a long time now. the Bruins, much like the Flames lacked identity and were inconsistent to no end.

"Since the season has ended I have completed a thorough review of the team and the coaching staff, and I have determined that Dave Lewis and Marc Habscheid are not the proper fit for the Bruins at this time," GM Peter Chiarelli said, before adding: "I have a short list of candidates in mind."


Lewis was spoon fed in Detroit as an assistant coach considering all of Detroit's success.

"I probably took a number of things for granted that I shouldn't, thinking that the players understand," he said then. "Where I came from, it's just sort of natural, which it really isn't natural. It's a learned process, so that's where I have to improve."

Lewis will receive another job somewhere in the organization.
What are the chances of Pat Quinn behind the bench in Beantown?