Share All sharing options for: Craig Berube talks about playing for Mike Keenan 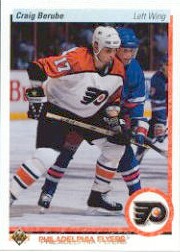 There was a great piece in the Calgary Herald on Sunday involving Craig Berube (who played for Keenan with the Flyers from 1986-88) talking about the persona of Mike Keenan.

"You don't want to get on his bad side," says Craig Berube. "That's what I remember. If he didn't like you, you were in trouble. And it was hard to get back in the good books."

"He'll come in there and shape it up as quickly as possible," he says. "If those guys want to play for him, they'll be a good team."


What will Keenan expect from the Flames?

"Play with balls," said Berube. "That's what he wants -- 'Show me something.' He almost likes --hmm, what's a good way of putting it? -- helter-skelter hockey, you know what I mean? Just go play. Skate. Hit. Get involved. Do something. It seems like he almost likes unstructured stuff. I'm not saying he doesn't have a system -- he does -- but he doesn't mind you going beyond that system."


Berube also had a few stories to tell.

"One day, we were going to have a scrimmage," he says. "We're getting dressed and, all of a sudden, here he is -- fully dressed (in equipment) -- and he goes, 'Here's your shot, boys. You want a piece of me? I'll be out there.' And he walks out. At that time, there were a lot of guys that just wanted to kill him because he got under guys' skin, man. It was pretty funny. But we went out and scrimmaged. Nothing happened."

Another time, Keenan challenged Rick Tocchet, his own player, to a fight. On the bench. During a game.

When miffed, the coach was known to roar into the dressing room and boot the first player he saw, Peter Zezel, in the shins. Till Zezel wised up one day. Pete put the extra goalie pads on top of his shinpads," cackles Berube. "So when Mike tried to kick him, he got all pissed off and left the room."