Cory Schneider to be moved?

Share All sharing options for: Cory Schneider to be moved? 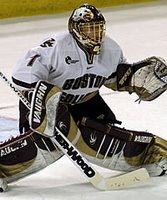 I think the reasons brought forth by Vancouver Sun columnist Iain McIntyre as to why Nonis could move Schneider pre/during draft day are well-put.

- Luongo is under contract for three more years, which coincides with the Canucks' window for trying to win a championship when Daniel and Henrik Sedin are reaching their prime and defencemen Mattias Ohlund, Sami Salo and Willie Mitchell are still in or near theirs.

- Luongo's backup need play only 10-12 games a season, and experienced minor-league netminder Drew MacIntyre, 24-12-2 with a 2.17 GAA and .922 save rate this season in Manitoba, seems capable of that; a year from now, Schneider will be overqualified for the job.

- On paper, Schneider is considerably better -- and far closer to being NHL-ready -- than any puck-stopper available in this year's draft, which is projected to be goalie-less in the first round for the first time since 1992.

- Nonis could use this leverage to swap Schneider for a talented, young forward who could help the Canucks' during their current window for winning.