Clarification on the John Muckler situation

Share All sharing options for: Clarification on the John Muckler situation 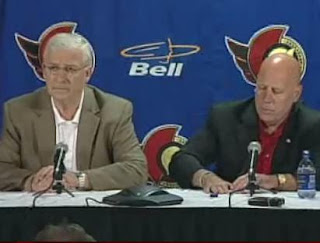 After watching the Senator's press conference, I can now see why John Muckler was released from his GM duties.

1. Bryan Murray's contract had expired and Eugene Melnyk decided that NOW was the time to promote him and change paths. Melnyk mentioned signing Murray to a long-term deal as a GM at this point.

2. There were conflicts of opinion. The unability of Muckler to bring Gary Roberts to Ottawa at the trade deadline was brought up and mentioned as a 'disappointment' by Melnyk. The owner said that was not a deciding factor. But really, I'm sure it played a role in it.

Muckler's ripe old age of 73 was not a factor in the decision.

Murray discussed that he would like to obtain some size, or bigger players at certain positions this summer.

It's a business. For Melnyk to say that he had not thought of promoting Murray recently was a lie, and was said to not hurt Muckler's feelings.