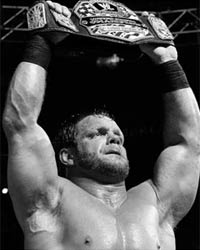 Speculation is running wild now as authorities, fans, and family try to piece together what really went wrong mentally with Chris Benoit in order for him to asphyxiate his mentally handicapped 7 year-old son, strangle his wife, and then hang himself in his weight room on Monday afternoon.

Benoit's father, Michael is thinking that some form of drug caused the problem, and is awaiting toxology tests.

The DEA and Sheriff's officials raided Benoit's doctor's office today to search for records and other items. Computers were confiscated apparently.

Anabolic steroids were found in Benoit's home, leading officials to wonder whether the drugs played a role in the killings, which took place last weekend. Some experts believe steroids cause paranoia, depression and violent outbursts known as "roid rage."

To give you a bit of a clue as to how powerful Wikipedia can be:

At 12:01 a.m. Monday, about 14 hours before authorities said the bodies were found, someone updated Benoit's page on the Wikipedia site stating that the reason he missed a match Saturday night was "stemming from the death of his wife Nancy."

VIDEO: Vince McMahon is interviewed on the Today Show. He does his best damage control, avoids steroids as a cause, and even refers to Benoit as a "monster". The video is seen below.

For a Benoit update for July 5, see here.

For a page of updated (hopefully) links to Chris Benoit news, see here.