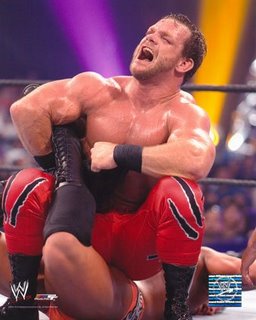 UPDATES
Tuesday, June 26/07
It's official. Reports from fox news say that Benoit smothered his son, strangled his wife and then hung himself in his weight room. A travesty in every word. And perhaps another call for wrestlers to get more time off, even though the 'Roid Rage' issue is being brought up. A black eye on wrestling once again that could cause some serious problems for Mr. Vincent Kennedy McMahon, CEO of World Wrestling Entertainment.
Tuesday June 26
-A day after the incident and I still find this surreal. Autopsies are being performed on the bodies today, but they will only tell more disturbing news on top of what we can already nearly assume: that Benoit murdered his wife and son before taking his own life in his weight room.
It's truly amazing how you can perceive how someone is by watching them on TV, yet you really don't know what a person is truly like. Outward appearances and expressions mask what is on the inside. I had watched Benoit wrestle since about 1999 and really admired his in-ring skills. He was near-flawless in the ring. He reminded me of the Dynamite kid and Brett Hart assembled into one person. Benoit literally cried when he won the world title at Wrestlemania 20. But don't be suprised if he was carrying around a lot of stress with: the wrestling schedule he was on, which is on the road a LOT, and perhaps troubled by all of the deaths of his friends in recent years, namely Eddie Guerrero in 2005. Like a lot of the roster said, he kept to himself a lot. Perhaps not a healthy thing. But hey, this is all speculation on my part at this point. I'm just angry at him for the bad choice he has now made, but I respect what he did for wrestling.
10:50 PM
From WWE.com: Several curious text messages sent by Benoit early Sunday morning prompted concerned friends to alert Richard Hering, VP of Government Relations for WWE, Inc. Hering, in turn, spoke with Fayette County sheriffs Monday, and requested that they respond to the Benoit residence to check on him and his family.

8:45 PM
WWE.com has just confirmed that it was a double homicide-suicide within the home.
Jeezus. This is a god damned shame and a complete tarnishing of his legacy.
Here is some news video footage.

When the news first broke out earlier today

I can't imagine what the hell happened here, but Benoit, 40, his wife Nancy, and their 7-year old son were found dead at their home in Atlanta. Condolences to their families.
You know, Benoit was trained by Stu Hart, and the deaths of the wrestlers who were in that Hart circle is very concerning and almost eerie. Benoit was very close to Davey Boy Smith and Owen Hart, who passed away in recent years. His best friend Eddie Guerrero had died in November 2005.
The reasoning for this tragedy is probably going to be hard to swallow. There can only be mass speculation at this point. According to City News.ca, Benoit missed a house show Saturday night and a Sunday night pay-per-view event. He had travelled home to Georgia for family reasons, but didn't elaborate on what they may have been.
More in the following days. I'm sure Raw will come to a grinding halt tonight to honor a true legend of sports entertainment...the Canadian Crippler.
This is too surreal...
and I have a bad feeling it was a murder-suicide, if you'll excuse my bluntness.

RAW
-Dean Malenko, one of Benoit's best friends then went on camera live. He said they used to call him Chris Houdini because he would disappear. He was quiet and private. Malenko has now lost 2 of his closest friends in Benoit and Guerrero in a short span. Called themselves the 3 Amigos.
Malenko told Benoit to use the Crippler Crossface as a finishing move way back.
Malenko said he'd miss Benoit's 'quietness'.
-Chavo Guerrero said that Benoit was part of the Guerrero family. When Chavo had found Eddie Guerrero's body, the first person he called was Chris Benoit.
-

Quotes about Benoit from his co-wrestling peers
-lived for the business.
-tough
-raised his children to be respectful
-helped the younger guys out, showed them the ropes and how to hone their skills.
-a machine
-a quiet, private person
-consummate pro
-a role model.
-respected, he demanded it and received it.
-passionate
-quiet yet extremely emotional