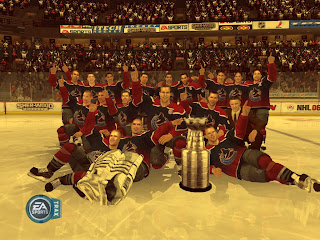 Well, on NHL 07 anyway. Temujin and I spent countless hours playing Dynasty Mode as the Canucks (we played on the same team) and finished off the the Flames in 7 in the semi finals and the Devils in 6 in the Finals. Ironically, it was Canuck Brian Gionta, who we had acquired earlier in the season, who stole the show in the playoffs, scoring about 14 goals and winning the Conn Smythe trophy.
Tears filled our eyes as the Commish handed Markus Naslund the Cup at center ice, and as Trevor Linden hoisted the prize, only to retire after the celebrations.
We had to build the team on speed to even succeed. Players like Ohlund and especially Salo were still much too slow and are going to be traded.

Go figure, Niedermayer and especially Beauchemin were monsters. Linden was slow and his shooting was absolutely terrible. We only dressed him in the last game so he could hoist the Cup!

So here you go, Nonis. Use out team as a template and let's win the damned Cup!!
Haha!