Share All sharing options for: Canucks acquire Shannon and Sharrow 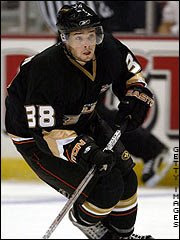 Dave Nonis made a couple of moves today by acquiring Ryan Shannon from the Ducks in exchange for Jason King. He also traded Jesse Schultz to the Thrashers in exchange for Jim Sharrow.
Jason King didn't want to play in Vancouver anyways, as he didn't like the money being offered to him last September, and bailed to play for Skelleftea in Europe. He scored 15 goals and 19 points in 55 games there. Jesse Schultz showed decreased production with the Moose last season, scoring 39 points in 67 games. The previous season he had 67 points in 80 games.

Who are the guys we got in return?

The 24-year-old Ryan Shannon is a short spitfire. He is 5'9" and weighs 178 pounds. He has only played 53 NHL games with the Ducks scoring 2 goals and 11 points I'm sure on the 3rd or 4th line. The initial scouting report on him was:

He is a excellent playmaker with superb passing skills. He is particularly great in power play situations. While he may be small, Shannon is durable, tenacious and works hard. He is smart and possesses great on-ice vision. He is an excellent skater with very good speed who moves well through traffic.

Check out his move on Turco in the shootout on my right sidebar.

Who the frick is Jim Sharrow?
Sharrow is a 22 year-old, 6'2" 198 pound defenceman who played for the Chicago Wolves last season. He scored 14 points in 42 games. He played 3 seasons in the QMJHL with the Halifax Mooseheads from 2002-2005, scoring 101 points in 191 games. Sharrow struggled with Halifax until the second half of the 2004-05 season.

The reports on him at Hockey's Future were: He boasts respectable size, and has finally begun to use it, playing an increased physical game. He has great quickness and mobility in his own end, though he will occasionally lose his defensive assignments. His defensive zone coverage was much better last season than it was in years past.
Sharrow’s greatest strength is his offensive awareness. Boasting great foot speed and agility, as well as creative techniques with the puck, Sharrow is the kind of offensive defenseman that teams look for. He has a quick, hard wrist shot, and is a shoot-first, pass-later type of player. He is very confident with the puck, even deep in the offensive zone.

Defensive consistency, and offensive decision making have been problems with Sharrow in the past, though he finished his junior career with flying colors, putting some of those concerns to rest, at least for the time being. He is also prone to taking stupid penalties at inopportune times, and will have to improve his discipline if he is to make the next step to the professional game.
So, basically a younger Brent Sopel!!

While Sharrow will be spending time in the minors, as the Nucks are deep on D, it will be interesting to see how Shannon fits in on the Canucks' roster, as he will probably get a shot at the big team, providing he impresses at training camp.