Bob Cole, Harry Neale and the Leafs to be demoted on CBC

Share All sharing options for: Bob Cole, Harry Neale and the Leafs to be demoted on CBC 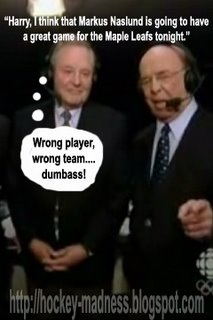 Thanks to Matt for pointing this out. This story was broke by William Houston at Globe and Mail Sports a couple of days ago.
It appears that there will be some changes to CBC's play-by-play department and their televised games.
Jim Hughson and Greg Millen will take over as the top play-by-play team, replacing the long-standing Bob Cole and Harry Neale tandem, who will have a reduced role. Hughson and Millen are younger and more fresh and deserve the promotion, as Cole and Neale have sounded a lot less enthusiastic and more prone to Alzheimer's in recent years.
All the years of hearing Bob Cole countdown until the final buzzer of a Cup-winning game and Harry Neale quoting Shakespeare and the like away are officially over. It's been over 20 years.

To the joy of many, the Leafs will get less exposure on national Hockey Night in Canada than ever before. Teams like Ottawa and Montreal will get more national exposure. William Houston put in this controversial way:

Another issue for Hockey Night is the quality of the Leafs' team. Insiders suggest there's a concern about the limited success the team is likely to achieve in the next several years. Most hockey experts rank the Leafs as the weakest among the six Canadian NHL teams. The probability of the Leafs making the playoffs any time soon is questionable at best. Hockey Night will seek to showcase Canadian teams with a better chance of advancing to the postseason.

He also mentioned that perhaps a big cause for the lack of viewers watching the Sens in the playoffs was because they were not given enough airtime nationally during the season. That is debatable.