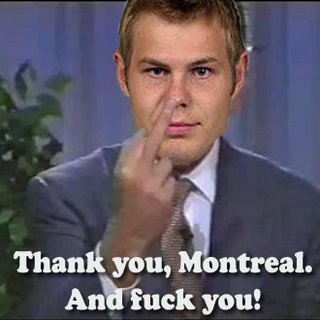 The Canadiens have rid themselves of one headache today, trading Sergei Samsonov to the Hawks in exchange for Jassen Cullimore and Tony Salmelainen. Cullimore is a large (6'5", 244 pounds), reliable stay-at-home type of defenceman who won a Stanley Cup with the Lightning. He had 7 points in 65 games last season. Salmelainen is a 26 year-old Fin who was drafted 41st overall in 1999 by the Oilers. He had 17 points in 57 games with the Hawks last season and 55 points in 53 games the previous year in Helsinki. A funny story about Salmelainen (from Wiki):

Salmelainen also made headlines during the 2005-06 season when he was sent off during a game against HPK, and threw a trashcan down the corridor to the dressing rooms in anger. After narrowly missing goaltender Jan Lundell, the trashcan accidentally hit his team's bus driver, who was injured in the face. Salmelainen was interrogated by the police and received a two-game suspension.

On a positive note, the 5'9", 185 pound Salmelainen has great speed and could regain some of his scoring touch with different linemates in Montreal. As of right now, he is streaky.
Samsonov is going to get a bigtime chance in Chicago to renew his scoring touch. He was benched 18 games in Montreal and demoted nearly the whole season. I say he plays admirably in Chicago.....IF HE STAYS HEALTHY. That is the real concern: the Hawks have acquired another injury-prone player to go along with stretcher-riders like Aucoin, Havlat, Handzus, Ruutu, etc.
I like this deal for both teams.