The Canucks have placed Chouinard on waivers today, according to RDS. While Chouinard was good on the penalty kill....well.... that was about all he was good at.

The Coyotes have placed Kevyn Adams and Nick Boynton on waivers as well.

The Canadiens' Tony Salmaleinen (acquired in the Samsonov deal) and Jason Culllimore have cleared waivers as they were not claimed by anyone.

In other news, Marty Brodeur has quit the NHL Competition Committee because, well, it doesn't matter what he says, there is nothing more getting done about protecting goaltenders during games.

"I didn't feel I was making a difference, and I hate wasting my time when it doesn't seem to matter," he told the newspaper. "I brought up a lot of different points, suggested different ideas like a bigger crease, but nothing's changed. The protection of goaltenders has just become ridiculous." 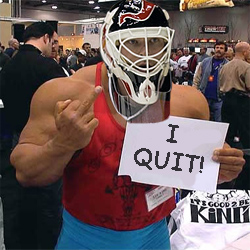 Marty Turco is supposed to replace him on the Committee, but I was thinking Roberto Luongo should be a better candidate. The only problem with that is that Louie may not be able to schedule that around his diving lessons....zing!