Who is knocking Brad May now?

Share All sharing options for: Who is knocking Brad May now? 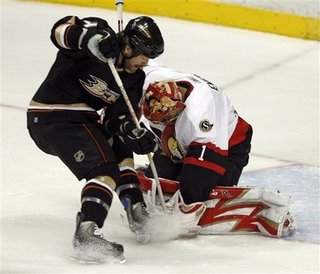 We are all wrong from time to time. And when Brad May sucker punched Kim Johnsson on April 17 during the Ducks-Wild series, it may or may not have been right, but it seems to me now that the biggest wrong was the press jumping all over May, calling him mindless, untalented, and having no place in hockey. I wasn't having any part of that and defended May on a site I won't name, and I received flack for it.
Well who's right now?
It was the likes of Brad May and Travis Moen who began crunching the Sens last night, hitting them at every turn, and like Getzlaf said, changing the momentum of the game. Thats right, Brad May. He may only be getting just over 6 minutes of icetime per game but really, his line could be used more. They also generate a lot of quality chances with their tenacious forecheck.
May was potentially wrong for his actions with Johnsson, and maybe he wasn't. I still say Johnsson was skating around the rough stuff and could have done something to antagonize an easily angered May. Who knows.
But it doesn't matter anymore does it? May served his sentence and was given another chance to play for the Ducks this post season and is making the best of every opportunity. He is also being a huge leader on and off the ice.
And the jackasses who called him a mindless, useless goon in April should now be eating a shit sandwich.
An even bigger 'fuck you' goes to the idiot experts out there on major sports shows, both Canadian and American alike, who called for May's head unjustly in a painfully bullshit attempt to clean up the game of hockey so that it sells in the States.
Go to hell!
The 36-year old Brad May has proved you wrong.