Verbal Wars: The Sedins Strike Back

Share All sharing options for: Verbal Wars: The Sedins Strike Back 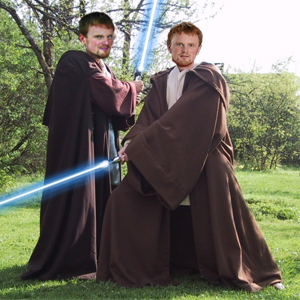 The Sedins have come under fire lately for their lack of offensive output and looking 'soft' during the playoffs. Daniel had 5 points and was a -5 in 12 games. Hank had 4 points and was a -8. It was revealed after the Ducks series that both Sedins were suffering from stomach illnesses. Regardless, I think that generally the media and perhaps a lot of fans like myself expected more out of them regardless.
Very recently the Sedins dropped their usual passive image and their dance moves, retaliating in a sense to all the bad press they have received.

"I've heard it all before, it doesn't bother me at all. But it's just wrong," Daniel said. "We played two playoff series against two tough teams, really tough teams. But there was no hitting on us. I don't think I got hit once in the playoffs. How are we soft then? I don't know.
But I know how far we've come. I know how we were in the first two years and I know where we are now. We've come a long way."

True. They have come a long way. The first question that comes to my mind is: "If they weren't hitting you, then why did you still look so awkward and ineffective out there?"

Henrik was a little more harsh with his words.

"A lot of these 'experts' come out and say we're perimeter players," Henrik said. "They're the same people who said we'd be nothing more than decent third-line forwards.
We're not perimeter players. We like to cycle, we like to hold on to the puck, but once there's a chance to go to the net, we're right there going to the hard areas.
We're confident we're playoff players and this result is only going to make us work harder this summer to come back stronger."

Who said they would only end up being 3rd line players? I think the expectations were always higher. I hate to be the ass, but I thought the Sedins were perimeter for most of those 2 rounds against Anaheim and Dallas. Oh well. They were sick, right? That doesn't make me feel much better. Steve Yzerman won a Cup on one leg....so.....

"We had a lot of quality scoring chances in tight, but they weren't going in," said Daniel.
"Then, we started worrying about things and changing things and we started doing things we don't normally do.
"I think we should have stuck with it, but when the pucks don't go in, it's tough."

Chalk it up as a learning curve to the Twins. Hopefully next time around the virus doesn't hit and they can fight through adversity regardless. We need these guys to be our leading scorers in the playoffs, because, to be honest, their futility more or less put us out of the playoffs.

Ah, life playing in front of Canucks fans and Canucks media. We don't miss anything, and we demand accountability. I guess we got that from the Sedins this time didn't we?

Hang in there Hank and Danny Boy. We still believe in you.

Quotes from the Vancouver Province.