So what do the Leafs do now?

Share All sharing options for: So what do the Leafs do now? 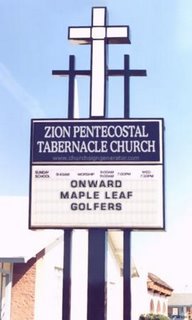 Leafs management is going to have some difficult decisions to make this summer in order to turn the teams' fortunes around. Is it time to hit the rebuild button? Do the Leafs even know how to rebuild? Or are they going to continue their gluttonous ways in the free agency market? Something has to change. If I was the owner of this organization, here is what I'd do:

1. Fire John Ferguson Jr. Then bring back Cliff Fletcher, or a GM that has balls and brains. Or, a GM who doesn't piss away young talent on aging veterans.
2. Do everything in my power to trade Bryan McCabe and shed myself of his $5.75 million salary. Leafs are currently stuck with the mindless tit for 4 more years.
3. Resign Michael Peca, and forgive him for writing checks with his mouth that his butt can't cash.
4. Resign Ponikarovsky (done) and Antropov, but not for any more than 2 million each.
5. Keep Raycroft. Second chance Motel.
6. Have one of my henchmen take Hal Gill out back and shoot him. (He takes up $2.1 million of salary space and he is sluggish.)
7. Let Jeff O'Neil retire. If he doesn't want to, let him go to UFA.
8. Definitely resign Ian White, but not for anything more than $2 million per season. Great upside to White.
9. Let JS Aubin go to UFA.
10. Resign Mats Sundin, of course. If he wants to go to a Cup contender, then I want three 1st-round picks for him.
11. If Maurice doesn't start benching the bums more often, then his ass is fired as well. I can't believe that Maurice has a Crawford Complex.

Since the Leafs were oh-so-close to making the playoffs last season, they can easily convince themselves, if not all of their fans, that tweaking their existing core is all that is needed to get right back into the playoffs where anything can happen.

That kind of sales pitch has been going on for some years now, and any shift in direction will be a departure from the tradition that has resulted in a Cup drought that now exceeds 40 seasons.