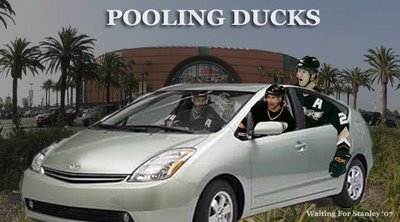 James, a WFS reader and new blogger, politely requested a Photoshop image of the Ducks, both Niedermayers and Chris Pronger carpooling to games. I missed the segment about it, so I used my imagination on what it could look like if the brothers from the same mother and Pronger packed in to a Toyota Pria (click image to enlarge). Obviously, I exaggerated Pronger's size.
The carpooling story was posted at Maple Leafs.com a few days ago. Apparently Giguere rides with them as well. He had this to say about it:

"It's fun driving with Pronger and Scotty and Robby," he said. "They're real leaders. For me, it's kind of sitting and listening to them and try to get some good advice."

The article raised the question if Carlyle and Burke will be "resting easy" when all of their top players are cruising in one vehicle, and Giguere joked:

"Not when Robby is driving, that's for sure!"

"Teemu (Selanne) is a speed car driver," the netminder said. "I don't want to go with Teemu."


Read more of the article here.