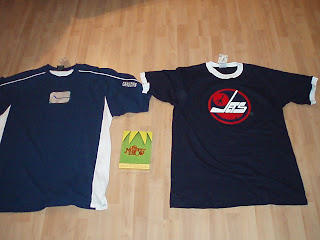 I usually try to keep my personal life out of this site and stick to hockey. But when my personal life has something to do with hockey I'll make an exception.
Since I live in a small (but terrific) town of about 5500 people, the shopping is limited. So myself, my wife and my sister drove 4 hours east today to the City of Prince George to purchase some goods. I got some decent stuff.
- a 42" widescreen TV
- a high definition satellite receiver
- bass drum double kicker pedals so I can thrash out on my drum set
- a year supply of Zakk Wylde Boomer guitar strings (crunch!)
- a Winnipeg Jets t-shirt (pictured)
- the 1st season of the Muppet Show on DVD (I'm a retro junky)
- (almost) most importantly, I bought my first-ever piece of Canucks merchandise: a Canucks stick-in-rink shirt. The only reason I got that is because I couldn't find a Roberto Luongo home stick-in-rink jersey. They were out-of-stock of Canucks jerseys at Jersey City. Yeah, Canuck fever is running wild in B.C. Guess I'll have to buy it online.
It almost feels strange having Canucks paraphernalia. For almost all of my life, it was almost like blasphemy for me to even touch anything of the sort, let alone wear it.
This of course was because I was so loyal to the Leafs. To be honest with you, I couldn't stand the Canucks after 1994. Why? Because Greg Adams buried a rebound past Felix Potvin in the 1994 Semi-finals in Game 5, and the Canucks went on to face the Rangers. Seeing Potvin sink into the net after that goal went in still breaks my heart. The Leafs blew a 3-0 lead in that one.
I was so loyal to the blue and white, that when Wayne Gretzky, my boyhood idol, scored the OT winner in Game 6 and a hat trick in Game 7 of the Semi-finals to destroy the Leafs in 1993, it took me over 5 years to forgive him for it. It took me longer than that (for whatever reason) to forgive Vancouver. My hatred and anger towards them boiled for years until a few things happened:
- the Leafs moved to the Eastern Conference in 1998. They sure played the Canucks a lot less after that. It eased my anger.
- I started following hockey a lot more closely in general, not just Toronto.
- the Leafs' pissing away of youth to sign and rent over-the-hill free agents for a playoff run proved futile and destructive. In the past couple years I just can't handle it much longer. Christ, I already had to endure over 10 years of Harold Ballard.
- Bryan McCabe. I fucking hate him. HATE!
- The last 2 years I don't think I have missed more than 5 or 6 Canucks games. Prior to that , I would watch some of their outings, but not as religiously as now. They have grown on me. The difference between the joke team of 2005-06 to this year's successful team is a great story, and I can't help but rally around it.
When this site first started last July, it was a Canucks/Leafs/NHL site. Now it is a Canucks/NHL site. Maybe the evolution is almost complete....

I guess buying that Canucks shirt got me thinking of how I've changed, and that is why I am being somewhat sentimental right now. It almost feels like when you have grown up in a strict Christian home all of your life and the second you move out, you get hammered and laid.... haha

We all know what the Canucks need to do tonight:
- work hard and create bounces
- capitalize better on opportunities
- play their game even when Anaheim presses
- play disciplined
- the Sedins NEED to show up tonight.
- Naslund and now Morrison need to continue their strong play.
- can poor Jan Bulis please get rewarded for once?
- Chop Selanne's head off! 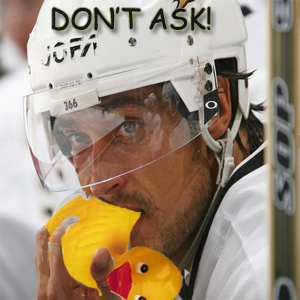 I see that Brandon Reid was called up on Wednesday. I suppose he'll replace Nathan Smith, who hardly even played in Game 4. Can you imagine if Reid becomes a hero tonight? It could happen.

This is going to to be a stressful time as we sit at the edge of our couches praying for a Nuck victory. But do yourself a favor: loosen up a little. Drink a hefty rum and coke, wave your towel, scream, and remember to be proud of this team no matter what. They have already done wondrous things this season, and times are only going to get better. Celebrate that.

3-2 Canucks, of course! Goals by Dan Sedin, Morrison and Reid. Duck goals by McDonald and Pronger.
The Canucks can skate with these guys. They just need a few breaks and to maintain their composure for 60 minutes.
Can you imagine how much the Ducks would be on the ropes if we win this one??