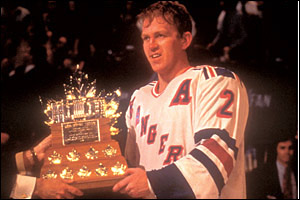 After (in a sense) bidding adieu to Brian Leetch yesterday, I had a few flashbacks. My biggest memories of Brian Leetch were:

1. When the Leafs acquired him at the deadline in 2004. Leetch made an immediate impact and clicked well with Bryan McCabe. He must have tought McCabe something about offence. Ever since that signing, McCabe's offensive output soared.

2. More importantly: the 1994 Playoffs. Canuck fans will eternally hate Leetch for his efforts against Vancouver in the Finals. That is a testament to just how great Leetch was. Sure, he was surrounded by players like Messier, Kovalev, Graves, etc. But Leetch made players around him better. That was the case in point in the 1994 playoffs. Leetch dominated all over the ice with his crisp passing, quarterbacking the power play, rushing out of his own zone, and laying nasty hip checks. Just ask Marty Gelinas.
Every time Leetch started out of his own zone with the puck, you knew that the opposing team was in trouble. It earned him a Conn Smythe trophy, the first American player to do so.
I can still remember having poverty television back then (CBC and BCTV). I watched the sports final on BCTV news at 11:50 PM religiously. The night of the Game 7 loss, John McKeachie came on and the first thing Keach said was: "Depressing. And it's spelled L-E-E-T-C-H." Or was that after game 4? Hell, he could have said that on most nights that spring.

Leetch continued his offensive defensive dominanance for about another 10 years before injuries and now, a decision to spend time away from hockey and with his family in Massachusettes, have caused him to retire.
He had the wheels to play longer.