Pronger speaks out about his 1-game suspension

Share All sharing options for: Pronger speaks out about his 1-game suspension 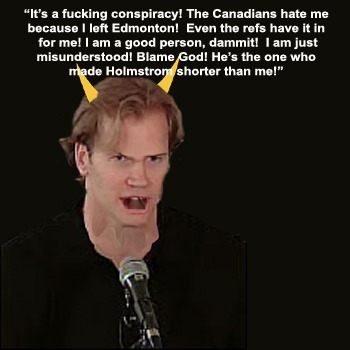 "The league should make its own calls, not be pressured into anything by the media, and more to the point, the Canadian media," he told the Los Angeles radio station AM 570.
"I think inconsistency in the refereeing has been there all season, let alone in the playoffs. All you've got to do is look at our games against Detroit. You could bring in other series. The referees have been very inconsistent from series to series, from game to game and from team to team. As you witnessed, (Thursday) night was an absolute joke. But that's neither here nor there. It's over with. I just hope going forward we're going to be on a level playing field."

As for the hit itself, Pronger said: "It's a nothing play if Robbie doesn't hit him."

Pronger raised the issue of height difference: "Of course I'm going to hit him in the head," Pronger explained. "He's quite a bit shorter than me. It's just law of physics."


I'm not sure where or how he got the impression that mostly the Canadian media influenced the NHL's decision. For one, both Canadian and American outlets were calling for a suspension. Pronger just didn't read enough papers.
To unleash his fury on the referees was probably not the right decision. He will probably be fined for it, and the refs are not going to cut him any slack at all on the ice now. The unfortunate part is that what he said was absolutely right. It just shouldn't have been said to the media.
As for what he said about the hit itself, I completely agree, as I mentioned a few days ago. It never would have happened if Niedermayer didn't make contact with Holmstrom at the same time. The height difference is always a problem when it comes to head shots. If I was in the NHL office making the decision I would not have given him a game suspension at all.
Anyway, it is in the past now. Pronger will now have to focus on the Wings on the ice.