Share All sharing options for: No Syuk For You! 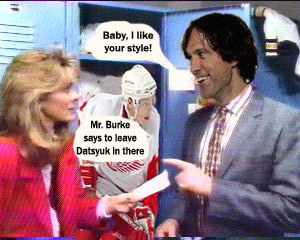 You could see the Ducks sticking, roughing and shadowing Pavel Datsyuk all night long and it seems to be paying off. Datsyuk managed to score a power play goal on a 5-on-3, but he actually had some room then. On 5-on-5, countless numbers of Ducks gave him a rough ride, especially the hero Scott Niedermayer, which must have made him feel like he was stuffed in a locker.
He only had 2 shots.
No doubt that Datsyuk is the offensive catalyst of the Wings. It's a great idea to shut him down and frustrate him. I don't see that Duck strategy changing anytime soon.
So that means that now the Wings will have to rely on secondary scoring. It seems that Mike Babcock took Zetterberg off Datstyuk's line to try generate something elsewhere. Zetterberg had 1 assist and 6 shots.
The Wings can count on Draper, Maltby and Cleary to chip in on occasion, but the consistent number needs to come from, and you guessed it...Todd Bertuzzi. Bert had no points and no shots last night. He hasn't recorded a point since April 30, in Game 2 of the San Jose series. He has had 6 shots on goal since then, according to ESPN. Atrocious. And I like it!
Robert Lang had 2 assists last night. In the previous 9 games he had 1 goal and 1 assist. Attribute most of that futility to him playing on a non-clicking line with Big Bert.

Yeah, you won't see any professionalism from me in this series. I want those Wings golfing by next week! 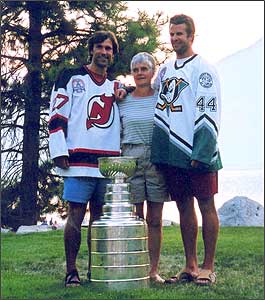 What a great story evolving from the Niedermayer brothers. Those guys are a force out there and their intense efforts are very evident. Robb has been to the Finals twice (Anaheim and Florida) but has not won the Cup before. I think these guys will stop at nothing to bring the Cup home to mom together in Cranbrook.