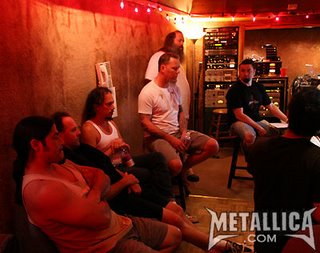 Metallica has been playing these tunes at their live shows for quite a while now. They call them "The New Song" and "The Other New Song" for now anyways. The tunes are apparently getting a positive response from the crowds, and they really should. They are basically a cross between everything they have ever written, and that is a good thing, because for the most part I have liked everything they have ever put out, except for Reload I suppose!
They began recording the new album in March and the album (their ninth) is scheduled to be released late summer/early fall. Apparently Rick Rubin is producing this one. Rubin has done a lot of work with Slayer, Beastie Boys, Red Hot Chili Peppers, Johnny Cash, etc.
Kirk Hammett's shredding solos have returned! He must be happy about that. If any of you watched the documentary DVD "Some Kind of Monster", you could see the look of disdain on Hammett's face when they informed him that solos were not to be included on their previous mediocre effort, St. Anger.
You can also sense a lot more positivity in James Hetfield's vocals on the new songs, talking more about life and new beginnings, rather than "d-d-death" and "fuck it all and fucking no regrets."
The evolution of Metallica takes another turn. They have gone from the crass, rowdy, self destructiveness in their early years, to questioning that destructiveness on St. Anger (and rehab for Hetfield) to "new life" on their upcoming album, as the new tunes hint at. They have grown up for the most part.
Check out the clips of the new tunes below and see what you think.


They could also put their own version of the Good, The Bad and The Ugly song on the album and I wouldn't mind either.