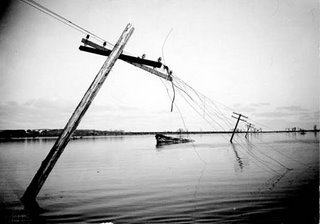 **UPDATE 2:52 PM**
Apparently the power line was knocked over by a tree, which had been chewed on by a beaver. Goddamned national animal!!! Never has a beaver caused so much hell!!! OK, get your mind INTO the gutter!
I also hear that the progress of the repair crew was delayed because another tree that drifted by had snagged the power line. Life in a Northern Town, huh?

The Town of Smithers and surrounding area where I live has been without power since yesterday at about 3:30 PM (Wednesday). I thought it was going to be a power bump or other short term glitch but it turns out that the power pole and lines had fallen into the Telkwa River about 6 miles east of Smithers, causing transformers to be shorted out. Boom, about 8000 people without power. I don't think I have seen a power outage in this area for this long before. The repairs may be complete by 4:00 PM today. There are only rumors as to what caused the lines to fall into the drink in the first place. Soil erosion?
A tree falling into the line? The hand of God? :)
One thing is for sure, you learn to respect and appreciate what you have when things like electricity are taken away from you. You also have to be more creative with your time!

So, I missed the Sens-Sabres game last night. Thankfully I didn't miss a series-clinching win by Ottawa.
It does appear that the Sabres shut down the Spezza-Heatley-Alfredsson line though; something they are going to have to do to get back into this series.
Do the Sabres even have a chance to pull off an upset 30 years in the making? Of course they do! After game 3, it seemed that Chris Drury was hinting at individualism and dissention in the Sabres locker room. I doubt that is happening now.
It's all about confidence. And the Sabres needed that power play goal by Afinogenov to squash some of that. It took a 5-on-3 to stop the PP futility.
There's nothing like 'playing like there is no tomorrow' to snap a team out of it as well.
See that look on Derek Roy's face when he scored the first goal about 8 seconds in? It screamed "Fuck yeah! We CAN do this!"

Jason Spezza said after the game 4 loss that the Sens are confident right now. When they were down 3-0 they believed they could win. They almost pulled it off.

It is a huge hill for the Sabres to climb. But if they can effectively shut down the Sens' top line and produce on the PP, they have a chance. But you know that the Game 4 loss may not rattle the Sens all that much, considering their confidence right now.