Naslund promises to improve next season

Share All sharing options for: Naslund promises to improve next season 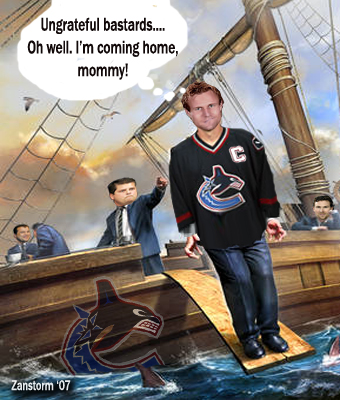 ''I know I can play better,'' Naslund said as the Canucks cleaned out their lockers and said goodbye for the summer. ''It wasn't a lack of effort, I wanted to do well. It just wasn't there.''

''I know I can do better, that's the bottom line. I'm proud of what I do. I want to show I can still perform. I'm going to come back and prove that I can play better.''

''The lack of offence was probably the difference in the playoffs,'' said Naslund. ''We've got to be able to muster up more than two goals a game.''

''I was used to playing on a line for a long time with guys that you got used to (Bertuzzi and Morrison),'' he said. ''It affected me more than I expected.''

''It took me a long time to really find my groove. I never played the type of hockey I'm capable of.''

Hands up...how many people don't give a damn about his promise and would like to see Naslund banished right now?
My hand is up, but I'd say it took me a couple of seconds to raise it. The reason for that is that Markus started scoring towards the end of the Ducks series. On top of that, he forechecked hard, was physical, and back checked as well. Perhaps he really was adjusting to the new style of play that Vigneault expected of him: his all-around game.
I just can't get around the $6 million contract. Naslund will have to play like Alfredsson is this season in order to earn it. I suppose that is possible. Alfie was critisized for being a gutless wonder in the playoffs up until now. This post season he is a force.
But still, it's 6 million fucking dollars. Combine that with Luongo, both Sedins, Ohlund, Mitchell and Morrison, and there goes about $30 million total. That is hardly going to cut it, as it forces Dave Nonis to go thrift store shopping in the offseason, like he did last summer, to fill the voids. Unless there are some decent Moose players ready to step in and contibute offensively a little more consistently, expect Nonis to have to roll the dice on more cheap potentials again this summer. It looks like we are stuck with Markus. (No trade clause in there as well I believe)

The following Canucks have their contracts expire this summer:

Ah, Nonis has his hands full, doesn't he?