Manitoba Tories promise to bring back the Jets...if they win

Share All sharing options for: Manitoba Tories promise to bring back the Jets...if they win 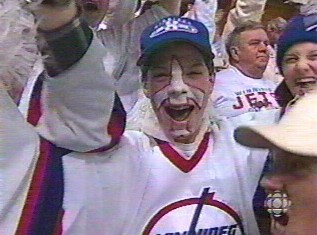 It's been a week of Canadian politicians using hockey as a platform for possible election. First the Doan saga, and now this:

Manitoba's provincial election campaign has turned its attention to hockey with the Conservatives promising to bring the NHL back to Winnipeg.

Standing alongside former Winnipeg Jet Thomas Steen, Tory Leader Hugh McFadyen said he'll work with the private sector to bring back the team, who left Manitoba a decade ago.

McFadyen won't say how much taxpayer money he'd be willing to put up, but says the government could follow Manitoba Hydro's example and raise money by issuing bonds.

He also says he would consider a special lottery to raise money as well as a players tax similar to one implemented in Alberta at one time.

The Tory leader says an NHL team would make Manitoba more attractive to young people and help stem the tide of university graduates who leave for Alberta.

A pretty ballsy call from these guys, and a great idea. However, if these stats are any indication, Winnipeg and the metro area has only grown by 28,100 people since the Jets' departure in 1996 (now 706,700 total). However, Seattle and Kansas City, other future rumored destination for an NHL franchise have less people inhabiting them than Winnipeg.
One pro with the 'Peg is that there isn't as much competition from other big league sports franchises, and the new NHL cap system would ensure a competitive team.
Remember, Jets fans raised $13 million to try to save the Jets back then.
The current MTS center in Winnipeg that was built to replace the old Winnipeg Arena that the Jets played in only seats about 15,000 people. That won't cut it.