Luongo / Brodeur Poll: Who is better?

Share All sharing options for: Luongo / Brodeur Poll: Who is better? 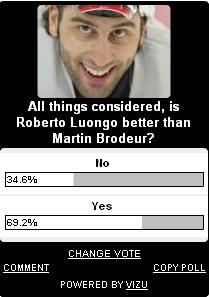 Is a 9-time NHL All star

Is Roberto Luongo better than Martin Brodeur? 69% of you voted 'Yes'. I am a little torn on the matter. Right NOW, Luongo may very well be better. At least now we can guage even more how good Luongo's numbers can be, as he plays on a more defensive team, a luxury that Brodeur has had for almost all of his 13-year career. Luongo played 6 of his 7 years on a dismal cellar-dwelling Panthers team, yet still had great numbers (besides wins). Long has Luongo been second fiddle to Brodeur, Hasek, Joseph, and Belfour, as those starters were in the limelight, playing in World Cups, Olympics, All Star Games, etc, while Luongo played well in the shadows. That has changed already. It's now a Brodeur-Luongo duo for goalie supremacy, and it's front and center, as both goalies log so much ice time.
Louie had a better playoff run than Marty did. However, Brodeur is not done yet. Not at 35-years old.
At the same time, the Devils may take a few steps back in the offseason, as the cap has caught up to them. Scott Gomez may jet through unrestricted free agency. That is a serious blow if it happens. Have you ever wondered how well Brodeur would have played on that lousy Panthers team of the late 90's/early 2000's? I do. He may not have put up the same heroic efforts that Luongo did. It's just hard to say. If the Devils lose a few strides in the summer, is Brodeur going to save them? Maybe. I want to see him play on a lousy team more often to guage how good he really is.
Brodeur's 12 shutouts this season was a stellar performance. Luongo had 5.
Brodeur's career stats are sick. He is well on his way to becoming arguably the greatest goalie of all time.
Luongo's career is young and has so much potential still.
There is no arguing that Brodeur's puck-handling skills are fantastic. It is a huge part of his game. Luongo will need to work on his.

I'm torn, but still leaning toward Brodeur.
You have voiced your opinion in the poll, now why do you think that way?

**I'm out of town all day today, so you won't hear from me.
Did you see the Sabres/Sens game? Terrific! The Sens look composed. Even when they skated off the ice after the victory they looked calm and composed. Buffalo doesn't even know what hit them! Bryan Murray was mentioning in his post game interview that the Sens kept cool, even after the Sabres had rallied from a 2-0 deficit. No kidding.**