Luongo blamed himself for the Game 5 loss

Share All sharing options for: Luongo blamed himself for the Game 5 loss 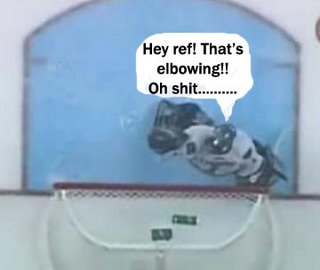 "It's probably one of the games I felt my best in my career," Luongo said. "I felt [I deserved better], but what are you going to do? Obviously I made a mistake there and it cost us the game. Right now, everything is surreal. Obviously, I'm disappointed because our season is over. I didn't feel like I deserved the season to be over. I wanted to keep going. I think it's going to hit harder when I wake up in the next day or two and I have nothing to do."

The mistake he is referring to is his theatrics towards the referee at the beginning of the 2nd OT, raising his arm to call a penalty like a ref would because he thought the hit on Hansen by Rob Niedermayer should have been a penalty. While he was airing out his armpit, Scott Niedermayer took a shot from the point and it went in. What a terrible way for a series to end. It really is surreal.
But I like how he says that he himself did not deserve for the season to be over. He didn't say 'our'. And that really was the bottom line in Game 5. Only Luongo showed up. He knows that.
I am left only feeling bad for Luongo as he played his heart out this year, and Trevor Linden, who showed that he still has some gas left in the tank. The Canucks will need to address their scoring and size issues this summer. Dave Nonis plans on doing that.
"We've got more to do," Nonis said after game 5. Expect some changes.