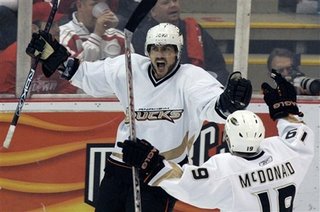 Hot damn! Andreas Lilja, who had scored the only Wings goal tonight, coughed the puck up in front of his own net and of all people, Teemu Selanne takes the puck in on Hasek all by himself, goes to the backhand, and roofs the puck over a sprawling Hasek, knocking off the water bottle. I don't believe it. But I sure as hell like it! Hey Earl, you can stop chewing your fingernails for now!

Bottom line of this game: The Wings can only be faulted for 2 bounces going against them. They executed a great game and fell short because of being unlucky.
JS Giguere kept the Ducks in it, as Detroit outshot Anaheim 37-26. It seems that Detroit outshoots them almost every time.

More irony: Lilja had this to say about Selanne yesterday (Los Angeles Times):

"He's a world-class player. I think when he has opportunities, sooner or later he's going to score. He's a goal scorer. So we just have to take him out of the game again.
He's probably going to have confidence when he comes in here tomorrow. We've got to work really hard to keep him outside."

Oh boy. I wonder how world-class he thinks Selanne is now.

Oh great a PP for Detroit in OT. Moen hooks Markov after a Ducks turnover and the refs had to call it. Ducks kill it.

Giguere is 11-1 in his career in playoff overtimes with a .917 GAA. He is going to need every bit of that magic to steal this one. The Wings should come out and dominate this overtime and Jiggy is going to have to be great.
I think Dan Cleary will score the winner for the Wings or Scott Niedermayer for the Ducks.

The Ducks have tied this game with just under 1 minute left. Scott Niedermayer scored on a flukey one as his shot from the slot deflected off of Lidstrom's stick and over top of Hasek. Poetic justice. Most media outlets absolutely stroke the name of Niklas Lidstrom on a nightly basis, but right now, the defenceman that needs the most praise is Scott Niedermayer.
Datsyuk had taken an interference penalty late in the game and Randy Carlyle pulled JS Giguere immediately to give the Ducks a 2-man advantage. It paid off. Hats off to Carlyle.
Hats off to Giguere as well who held a Duck team in it that really couldn't regain it's form after the Wings had scored their first goal. The 2nd period was almost the Ducks' undoing as they were outshot 15-3 and were shorthanded for 8 minutes of that frame.
The Wings had them right where they wanted them: shut down and frustrated. Wow. What a turn of events.


What a huge game that just started against the Wings and Ducks. From what I've seen in this series, here are a few things I've noticed that the Ducks will have to do to seal the deal.

1. Get a lot of traffic in front of Hasek. Last game, Dominik had by his standards, a 'human' game. That won't happen again. Anything he sees he usually stops. The Ducks had a lot of traffic around his crease in game 4 and will need to give the Dominator restricted vision again tonight.

2. I wasn't impressed with how the Ducks played in front of Giguere in Game 4. Lots of loose pucks that were not cleared away, resulting in the Wings getting garbage goals. Play stronger and in front of your netminder.

3. Selanne's 3 points in Game 4 were his first of the series. Andy McDonald has 1 goal in the series, which he got in Game 2. That is not good enough production from your top players. Too bad Kunitz is lost. He gelled so well with those 2.

4. It seems that Detroit is the faster team of the 2. The Ducks, when on their game, can shut a teams' speed down and keep them to the outside. They need to do that without getting obstruction penalties.

5. Continue keeping Datsyuk off the scoresheet.

6. Like Glenn Healey mentioned, one of these goalies needs to emerge and steal the series.