Share All sharing options for: Gory Image of Pronger Hit / Pronger Gets 1 Game 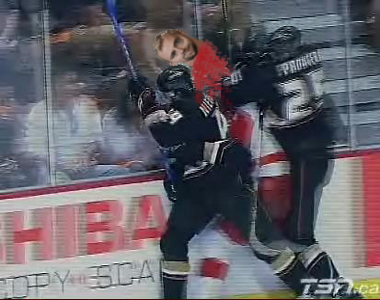 **UDPATE Thursday May 17** Chris Pronger has been suspended for 1 game for the hit. Brian Burke disagreed with the suspension, "suggesting part of the problem was that Holmstrom didn't have his helmet done up properly."
I think this decision by the NHL is bullshit. My reasoning is stated below in what I posted yesterday, and as well what a commentor had stated: that Holmstrom returned in the 3rd Period. The doctor on the ice told him to 'stay down' making it look worse, etc etc.

As Bob McKenzie from TSN had mentioned today, so much of the attention after Game 3 is on the Pronger/Niedermayer hit on Holmstrom, when really the main focus should be on the fact that the Red Wings annihilated the Ducks 5-0 to take the lead and momentum in the series.
I'll briefly tackle both.

The Hit
Is Pronger going to get a game suspension of more for that hit? Should he? I say no for a couple of reasons.
1. Alfredsson boarded Kalinin in Game 2 of the Eastern Final and got nothing. Got to be consistent right? If it was Brad May that hit Holmstrom the axe would have fallen I'm sure.
2. Watch the hit slowly.Pronger was going to make more contact with his arms with Holmstrom's upper back until Niedermayer made contact with him. Then it became a head shot. Think. It happened in a split second. Niedermayer's hit was not going to be boarding anyway. Pronger was going to push him down, more at an angle along the boards. Chalk it up as a flukey accident for the most part.

Why does Anaheim look so slow? Probably because Detroit is so damned fast and they are moving the puck around so well. The Ducks should not get into a skating game against the Wings, but rather, clog up the neutral zone and slow these bastards down.

A lot more traffic/interference in front of Hasek wouldn't hurt either. Hey, Holmstrom's doing it.

How are the Ducks going to come back mentally from this ass-whoopin'? I think Earl Sleek made a good point last night in his drunken anger:

I’m pretty glad, actually, that it was a 5-0 final. Had we lost 2-1, maybe there would have been no urgency for a G4 adjustment.


Prior to Game 3 the Wings had not scored a goal 5-on-5. Well that all mightily changed last night as they scored 4 of their 5 goals at even strength.

Go figure, Bertuzzi's only goal in a coon's age goes off his skate....geez.