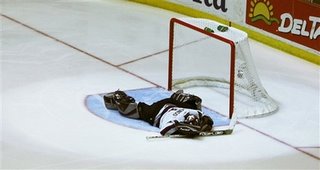 Apologies for not finishing the previous post last night, but naturally, I was too drunk to use a keyboard.
It was a good thing to be gooned during the 3rd period and overtimes as it numbed the pain considerably. I was getting cocky during the extra periods though, screaming "Shades of Hasek! Shades of Hasek!" thinking that with Luongo stopping so many shots the Canucks were going pull off one of the greatest upsets of all time like Hasek did in the Sabres' run in 1999.
But it was not to be, and Luongo's gripe and arm-waving over the hit on Janen in the 2nd overtime was his undoing, as he missed a Scott Niedermayer shot from the point in the process. It was surreal. Luongo layed on his face in dismay after the puck went into the net. I felt temporary anger towards him for the blunder, but almost immediately realized that he had already faced 58 shots and was the only reason that this was still a game.
There isn't much to say about the rest of the team's effort. Getting outshot 63-27 in an elimination game should be and is an embarassment. Thankfully, that disgrace of an effort will be easier to forget, as Luongo kept it close. The score with any other goalie in net would have been 7-1. That kind of blowout we would remember for eternity I'm sure.
Anyway, there are some interesting reads in the Vancouver Province today: 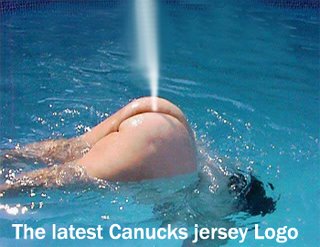 The Sedins both had stomachs virus' since the Dallas series. Oh, that explains their pathetic efforts this series. I'm not completely buying that shit either. Suck it up.

"It's nothing we want to use as an excuse," Daniel said. "But because of it we haven't had the jump. Even so we have to play better than we did."

What did Luongo say to Sabourin when he relieved him of duty in the OT?

"He said, 'I'm sorry to put you in that spot,' " Sabourin said. "He said it in French and he said it fast. I knew he said it fast because he had to get back into the net."


"What can you say about [Luongo]," said Brendan Morrison. "It was probably the best goaltending performance any of us have ever seen in one game."

Yeah, and for most of the playoffs, your play was the worst I've seen, Morrison.

So now begins the aftermath for this team. Changes are going to happen, no doubt. Obviously, we've seen the end of Smolinski in a Canucks jersey, and that is a good thing. He didn't quite fit in or create much offensive spark at all when we needed him the most. Adiose, Smoke.

I'm still proud of what they accomplished. To be honest with you, I almost think they overachieved, and that was a pleasant suprise, as I had tagged them to miss the playoffs at the beginning of the season.

I'll stay on top of any Canucks news on this site. But now I am also going to cover the rest of the teams still in the playoffs. I've been following all of the other series as well. I love hockey. I love the playoffs. And as much as it stings to say this.....GO SENS! 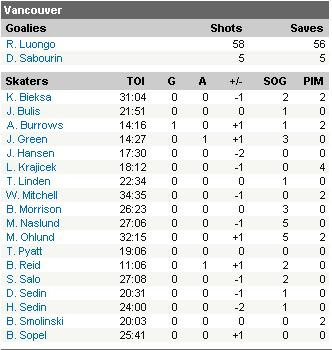 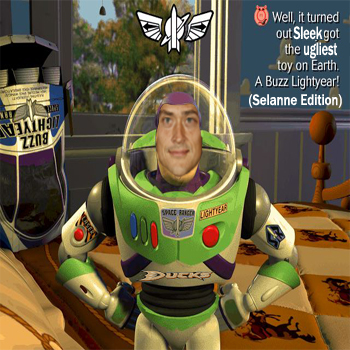