I am almost at a loss for words. Everything was going so well for the Canucks through 2 periods. They had a 2-0 lead, they killed penalties effectively, Luongo was solid, they looked in control. But once the Ducks started pressing harder in the 3rd, the Canucks started scrambling a bit and losing their composure. A screened-shot goal by Pronger 3:58 into the 3rd only added to the pressure. The Ducks kept their momentum and started to get some breaks. Selanne's tying goal at 14:18 was mostly the result of Salo losing his stick at the blueline moments earlier. Teemu put the puck through Salo's legs and past Luongo. A rebound goal.
From that point you had to wonder just when the Ducks would score the winning goal, as the Canucks looked rattled, coughing the puck up in their own zone and not playing like they had earlier in the game. That winning goal came at 2:07 of the 1st OT: an unlucky bounce off a player in front of the net from a Scott Niedermayer point shot, and Travis Moen, of the Ducks' 4th line recieved a gift, burying a shot past an unsuspecting Luongo. Nice changeup by Carlisle playing his 4th line in OT for once. It paid off.
It really didn't have to happen this way. The focus on the Canucks' subpar power play now shifts to their ability to capitalize on their chances period. How many 2-on-1's did the Ducks give them? And how many times did Scott Niedermayer get in the way of those chances?? A solid game by him.

It could have been sweet

-Markus Naslund scored his 3rd goal in 3 games.
-Brendan Morrison stepped up finally and was a force out there.
-Jan Bulis and Jannik Hansen were terrific again, but could not capitalize.
-The power play looked effective, and they generated a lot of chances.

In this game, the Ducks were only shorthanded 3 times to the Canucks' 8. Neither team scored on the power play.

When the Ducks stepped it up a notch in the 3rd, they got their bounces.

In and out of the WFS Doghouse

IN
- The Sedins. I am still not seeing their A-game. They look uninspired and/or frustrated. Hats off to Vigneault for rolling the 4 lines more.

OUT
- Markus Naslund has both feet out of the doghouse now for sure. He had a strong game.
- Brendan Morrison. Hustle, determination, grit. Too bad Mo hasn't played this way all along.
- Roberto Luongo. He bounced back and was solid. Poor Louie didn't have a chance on any of the Ducks' goals.

For the Ducks being the superior team on paper, it isn't really showing. These game could go either way, and tonight was no exception.
The Canucks will have to sleep this one off and come out with the same game that they brought tonight, and hope that they get the bounces in Game 5. One thing is for sure: we will now see how they play with their backs to the wall. Despite my frustrations, I drool at the possibilities of this series going back to Vancouver for Game 6. It can happen. If we were blown out 5-0 tonight, I wouldn't be so confident. 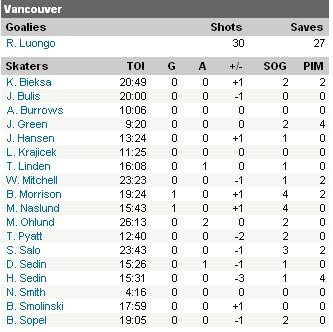