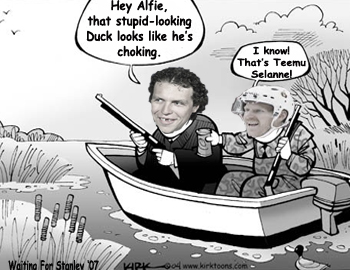 I've mentioned a lot about these Finals already, but I'll lump everything into one post now.
I don't like Anaheim's chances for various reasons.

1. The Ducks didn't have their "A" game going on in the final 3 games against Detroit. Sure, they still closed out the series with Giguere's terrific play, but I don't see them getting away with anything lackluster against a team like Ottawa. The Sens have buried all 3 teams they have faced this post season, all in 5 games. They are more composed than Anaheim is. Who knows. Perhaps the Ducks will now step it up in the Finals.

2. In the playoffs (forget about the regular season), the Sens' power play is ranked 2nd at 20% efficiency. The Ducks' PP is 7th overall at a 15.3% efficiency. (Thanks, TSN!) Where is the output from a team that boasts 2 of the best defencemen in the NHL?

4. Depth advantage: Ottawa, easily. Up front and on defence. Wouldn't you rather have Dean McAmmond than Brad May? Not to knock May as much. I think he's played well. Between the pipes it's Anaheim all the way. If anything were to happen to Ray Emery, the wheels would fall off for the Senators, because you know that Martin Gerber is not nearly as good as Ray is. Ilya Bryzgalov is more than capable of backing Giguere. I'd say that the odds ofd Emery becoming injured are slim, but I haven't easily forgotten what happened to Dwayne Roloson in Game 1 in last year's Finals.

In the Ducks' favor:

2. Size? Does the Ducks' size matter? They are the bigger team by a bit of a margin. It may be hard to wear down a team that has only played 15 playoff games so far. The Sens should be fresh.

3. Home ice advantage. They had better take advantage of it.

It will take a lot of things to go wrong in order for the Sens to lose. It's hard to see that happening the way they have looked so poised and confident.
I am looking forward to the goaltender battle between Emery and Giguere. Can Emery maintain his composure with all the pressure he is about to face?
I'm also interested in the shorthanded battles. Marchant, Pahlsson, Fisher and McAmmond are threats to score shorthanded.
Which powerplay will be hotter?
Which team will dominate 5-on-5?

Is it Monday night yet?! I'm tired of waiting. 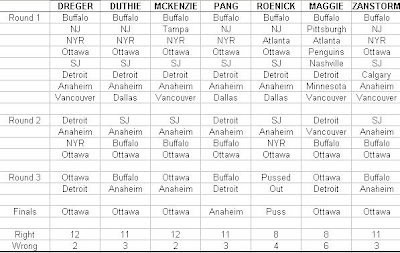